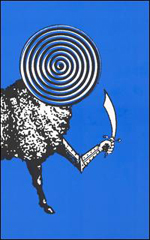 Interesting that when music is in the process of becoming ephemeral, intangible, marked by an absence rather than a form, making whatever tiny little microchip carrier anachronistic by virtue of it being a thing you can touch, former Lungfish chief Daniel Higgs drops a big honking pile of traditional media in our laps.

Atomic Yggdrasil Tarot is a 48-page art book of paintings and acrotics named after the tree of life in Norse mythology and the tarot-like experience of flipping through the books pages while listening to Daniel's recording.

I'm hardly steeped in what makes for a tarot-like experience and, though I imagine the ideal scenario in the reviewing of Atomic Yggdrasil Tarot involves me sitting down with the book described above then putting on these spiraling, lo-fi noise pastiches of whirr, thrum, and fluorescent light ambience (and getting high), I'll have to resort to looking at the pictures on my monitor, listen to these feedback loops and ignore my computer, which quacks when I have e-mail.

The concept at work here is interesting and often impenetrable stuff, but to assume that one can navigate it without the correlative art book is problematic and raises the question of what, here, I'm intended to review. Without its accompanying art Atomic Yggdrasil Tarot is nothing seminal, nothing special, though certainly something worth checking out for fans of drone and noise rock (especially "Creation Moan," which bloats and distends into monstrous fun). What many will hear is guitar, piano and jew's harp played into a tape recorder and spat back mediated by a shroud of dirt and distance, which is exactly what it is. To infer the tree of life of whatever, the cosmological iconography, is to ignore the tactile appeal of musicianship at work.

And besides, one has trouble interacting with Higgs' self-legitimizing analysis of value and the artistic center anyway. As an album half crippled by its dependence on an entirely different form, one might assume that this music is underdeveloped (certainly underproduced) and imposing cacophonous, literally astrological meaning where there is little evident. Relegated to secondary status, the album is background to the book, which seems to have enjoyed more of Higgs' attention. But there is a facet in which Higgs, in releasing something so seemingly obsolete and archaic as a book, is returning to and attempting a recovery of the notion of buying an album, getting something, putting it on your shelf: good old fashioned fetish property. I once e-mailed Mogwai and asked why I kept buying their CDs when I took out the weak little folded piece of paper, ripped the CD to my computer, threw it in the corner and never looked at it again. They replied "our music is on it," and I felt like I had failed completely to articulate my point: if ethics are not an issue (and, really, for how many of us is it?), downloading is both the horseman's trumpet to and the rejuvenation of traditional music media; artwork is a way to compete with MP3s, and in that regard Atomic Yggdrasil Tarot is a victory, and a gorgeous one. The problem is that, as an album, it's half-formed.

The project would benefit from an analysis by someone with not only a background in 80's post-punk and criticism, but in mythology, Marshall McLuhan, tarot, art, and where best to buy the craziest drugs. Unfortunately, I'm given to simply clicking play of my trusty, transcendent MP3s, noncommittal and elusive, beads of electricity sparking somewhere unseen to spell out each of these six experiments. And what they tell me is that this noise is trenchant.