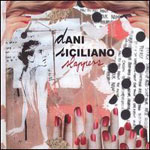 I wish I could write this review without saying “Herbert,” since his actual work on Slappers beyond “contributions from” and final production credits is unclear, but when “Didn’t Anybody Tell You” rolls deliciously on a Dave Okumu/Neil Thomas guitar/beatbox duet quite similar to the one I witnessed at a Herbert concert recently (sans Siciliano) it’s hard to pry them apart. Siciliano has been the voice of Herbert for years; Herbert’s music would lose its quirk without her (and, really, seeing Thomas sing her parts was awful, and not because of the gender difference, but just because dude has the personality of a rock). But if Herbert has been praised for his innovation, Siciliano’s work is in some ways more experimental, and hear she takes all “early production” credits, interested in exploring odd phrasings and riffage that accentuates attitudes and emotion at the expense of melody and rhythm. Similarly, if the self-importance of Herbert’s politics grates (off-album, it often does, and I’ll admit that my review of Scale phrases the politics in a way that makes them easily palatable for me), Siciliano is pursuing a line of interrogation that’s less likely to make you recall your undergrad papers from political science 1001. Slappers (though the title track is produced from samples of various body parts being slapped, it also is likely a play on “flappers”) is an incredibly feminist album.

I’ve seen early reviews that have compared this to the chin-tickle politics of Peaches, which I’m okay with, except that the chin-tickling itself is a creation of critics and doesn’t seem to get Peaches or Siciliano in the first place. Peaches employs gender-bended expressions of sexuality to back-hand “sexy” into a political disavowal of the patriarchy she rails against (which means it’s only sexy on her terms, and since she’s backhanding male music fans as a simulacrum for a macro-phallic, I really wish we could get more men supporting her politics without trying to adopt her like a proud daddy); Siciliano is less liable to shit on your stomach (metaphorically, of course, because my one contention with Peaches, aside from her sucky music of late, is that I get the distinct impression she employs certain proclivities specifically for shock, and not, for example, as the Hidden Cameras do, to refashion political liberation within the natural needs of our bodies). Siciliano is just as confrontational, unfolding guerilla titillation at all of our laps, a red carpet to a punch in the face. Sonic porn buffs should pay attention: yes, she says things like “get off, get off on me,” but she prefaces that with “so here’s the fantasy” on “Didn’t Anybody Tell You.” It’s not seductive, therefore, and it shouldn’t have to be, because being sexy for one’s self in public shouldn’t mean everyone can watch. And, yes, she does say things like “I couldn’t wait to get it in me” but she also says “I could wait to get it on” or “in me” and the song is called “They Can Wait” and by subtly and constantly changing word orders the track becomes a labyrinth about a women’s control of her own body and her ability to fuck and tell partners to fuck off.

All of which is to say that Siciliano’s second album treats the patriarchy like it owes her money (which it almost certainly does), but since Siciliano’s message isn’t always supported by the most interesting poetics—this is practical, make-no-bones (or, I guess, boners) language that would sound ludicrous read aloud—it’s fortunately supported by music that’s more engaging than her first album (2004’s Likes…), whether it’s Herbert leading or Siciliano following off the deep end of experimental disco-tinged pop. It’s not the same thing, you know; however important Herbert was to the sound of this album, the Siciliano self-produced “Be My Producer” musically and politically makes the point: it sounds like Herbert, but every sound was created and produced by Siciliano, and the song is basically Siciliano asking herself to fellate herself, to make herself her music to sing over, seduce over, and the track is such a word lyrical turn from the album that the point basically has to be that she doesn’t need a producer, right?

The answer, practically and artistically, is less clear. “Slappers” is all groaning machinery before the flesh orchestra enters. The track is fun, despite its ominous tone, and Siciliano fluctuates between her high and low range constantly, the Betty Roché of modern pop. “They Can Wait” trills flutes over thick bass lobs and rolling one-note organ lines. The scattershot approach accentuates Siciliano’s mad-lib vocals, but the track itself sort of stalls at the chorus, as silly pitch-bent Theremin patches drown out far more interesting acoustics. “Why Can’t I Make You High” rebounds with a blues riff slinking over a rockabilly beat, Siciliano following unpredictable vocal routes and engaging in a singalong chorus. “Frozen” is pretty, if pretty unadventurous, but “Too Young” grounds the center of the album with one of Siciliano’s more lovely melodies. “Think Twice” stays on point, and lines like “you maybe think that I could be the things that you could never be out of respect” and “you may be asking me to be the things that I could be out of respect” light the fuse of charged political clusters that explode as she changes refrains slightly again and again. “Big Time” wraps pirate metaphors into a great pop track, even if Siciliano is a little too excited by the nautical puns. “Repeats” builds like a fire, while “Wifey” screams right out of the gate; the former a slow deliberation on deceit, the latter a caustic look at the institution of marriage.

The sum of which is less exciting to calculate, because while Slappers does contain some excellent tracks, it’s a liminal album, too experimental to succeed big as a great pop album, and too similar to Scale-minus-horns-and-strings (whether it’s Siciliano or Herbert pulling strings) to allow Siciliano an experimental pop gem of her own. It’s a shame, because Siciliano is so obviously passionate about her subject material when she writes her own songs, but once again, similar to Likes…, I feel like she gives her best performances on Herbert’s albums, and whether that’s because of the way he arranges melodies…well, I don’t know. I do know, however, that after enjoying a few run-throughs following along with Siciliano’s narratives of empowerment, I quickly found myself hitting skip to get to the good parts.