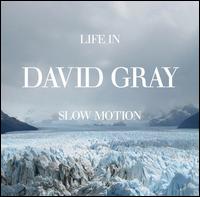 Uh-oh. In the wake of a third Coldplay album, do we really need more sensitive, sentimental Euro-balladry? Irish singer-songwriter David Gray makes a solid if not striking case with his sixth proper album, Life In Slow Motion. His previous work, 2002’s A New Day At Midnight, was about endings: it was the exclamation point to the critical and commercial breakthrough of White Ladder, and took the electronic sound he’d previously dabbled with as far as it could go. Three years later, with no residual hit singles or critical good feeling to fall back on, Life In Slow Motion is the faltering first effort towards something new.

It’s certainly a change in direction; gone are the keyboards and video game beeps that characterized ANDAM. Instead, the Van Morrison-influenced Gray has turned for the most part to traditional folk instrumentation, slathering over the songs with strings, guitars, and pianos. This is a full-blown studio disc, helmed by Marius De Vries of Rufus Wainwright’s Want One and Want Two albums. It’s a bit of an experiment for Gray, whose recent albums have been characterized by the ability to successfully create within the limitations of a bedroom environment.

While Wainwright had no trouble matching his producer’s flair for flamboyance, Gray often seems overwhelmed in the swirls of orchestration. For a songwriter whose strength lies in simplicity, his voice seems extraneous in the enormous breakdown of “Disappearing World” and the wordless chorus of “Slow Motion.” When the arrangements let Gray breath, as on “Alibi,” the pounding “Nos Da Cariad” and the relatively stripped down “From Here You Can Almost See the Sea,” his melodies and songwriting are as good as ever.

As always, the lyrics tip-toe the line between obfuscatory, image-rich poetry and silly drivel, depending on the song and the listener’s tolerance for Gray’s non-sequitors: “The One I Love” is an epically cheesy love song, where he sings, “Tell the repo man / and the stars above / You’re the one I love.” The wistfulness of “Ain’t No Love” makes up for the occasional laughable line, as does “From Here You Can Almost See the Sea,” which contains one his best verses:“I saw a film once,” he sings, “Where all the air holes froze up / A killer whale swam / Under the blue ice / Until her heart stopped.”

Though blanketed in the safety of studio sophistication, Gray remains a talented artist who deserves to be set a notch higher than many of his contemporaries. Life In Slow Motion is a far cry from the flame-outs of X&Y and ATO label head Dave Matthews’ horrendous Stand Up, and while it may not match his most impressive work, he continues to challenge himself. If nothing else, Gray’s latest album is a respectable step forward and --- especially after that Coldplay album --- a welcome addition to the pop landscape.