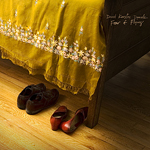 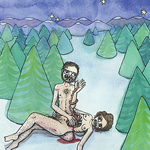 They say misery loves company, though the cliché hardly holds in the world of music. Seclusion, rather than inclusion, tends to be the rule when artists sit down to record their dourest material. I don't think anyone can say--with a straight face, that is--that Pink Moon (1972) would have retained its skeletal bleakness had Mr. Drake pulled a Danielson and invited all his best musician friends to play back up. Seriously, why sulk in company when you can fight your demons all by your lonesome? For folk artist David Karsten Daniels, a man with his share of demons, the answer lies somewhere amongst the 19 comrades who helped him record his Fat Cat debut, Sharp Teeth. As sappy as it sounds, good friends take the edge off, making even the heaviest of times seem a little lighter.

Just listen to "Scripts": it starts out as a typical tale of parting, with Daniels singing in a wistful, Akron/Family fashion, "I can't say 'talk to you later' / so we'll just say goodbye." It's a downer, but then his friends jump in and transform the bleary-eyed departure into the kind of joyous funeral march I imagine Jeff Mangum's embalmed body being carried off to. Sure, there's still a hint of sadness to those drunken horns and splashing cymbals, but it's the kind of nostalgic sadness that one feels a desire to hold on to, and even feels happy doing so.

On "American Pastime," a ballgame organ and bobbing rhythm guitar turn a discourse on the struggles of minor label obscurity into the album's catchiest song. Metaphors abound as Daniels confronts his harsh reality with resignation ("I'm not cut out for the major leagues") and some of the album's bloodiest imagery ("As you quickly reach in for your knife / Ooh oh / I'd pepper bullets across your spine"). The baseball metaphor is predictable enough given the song's title, but the allusions to warfare in the second are a little less intuitive. Here Daniels is suggesting that, to Americans, war is just another form of entertainment that people milk for profit. Personally, I can't help thinking back to a time when "star athlete" and "soldier" weren't necessarily mutually exclusive terms. (Ted Williams, for one, gave up four of his peak athletic years to serve in the Marine Corps during World War II.)

“Minnows,” Sharp Teeth's most impressive track, begins with a creeping violin crescendo grounded in martial drum whacks before erupting into a group chorus comprised of Daniels' multi-tracked voice. The singing releases the tension like a deep breath after a nerve-racking day of work, but not without a somber air to it: "Drinking blood and drowning us," Daniels wails as hacksaw guitars match the apocalyptic verse. On "Beast," in the album's most crucial moment, Daniels warns, perhaps himself, "You're gonna have to look the beast in the face." It's a grim message made grimmer with crumbling guitar downstrokes. It's not cause for too much concern, however; dude's got his own support group right there in the studio.

Unfortunately, not all of Teeth is as sharp as these highpoints. Daniels' songwriting is unfocused at times, and the slow-paced instrumental pieces included here ("Sharp Teeth I" and "Sharp Teeth II") seem superfluous and merely act to undercut the album's momentum. But considering this is Daniels' first widely available record--and his first record with a full band--these flaws are more than forgivable. With a little bit of refinement, David Karsten Daniels and friends may have their best work ahead of them.