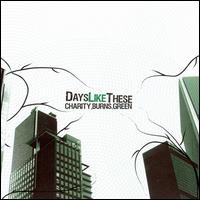 Days Like These is a band, not unlike many others, that suffers from a great deal of existential despair.

But the problem is that there’s no anchoring point to this despair. Lines like “I can’t live like this,” without any qualifier as to what “this” is are unfortunately too vague to have any real content. And regrettably, the band never leaves this turgid lyrical ground; track after track of “proving you wrong,” or “shedding outer skin,” tentatively reach for meaning while remaining safely out of any zone of specificity or vulnerability. Lyrically, the closest reference point I could think of is Linkin Park.

The band’s song structures reflect a similar wariness of risk. Furious power chord riffage with an occasional requisite delicate ballad chord fills out the arrangements with disappointing predictability. At worst, it’s aggravatingly callow, and at best, Days Like These sound like At the Drive-In-lite. “Preparation Anxiety,” which even sounds like an ATDI title, bears background guitars that seem pulled straight from Relationship of Command. The dual guitar dynamic that ATDI plumbed to some success shows up again on the introductory measures of “One in One Thousand” and all through “Bruises.” Angel Santiago’s vocals even veer near Cedric Bixler’s wailing intensity.

Unfortunately, DLT undermine themselves by oversimplifying the ATDI formula of dueling guitars and punchy bass; on “The Sergeant’s Son,” some wicked, limber bass work supports excellent guitar dueling, but within a few measures the bass’s creativity is dumbed down to largely two notes, and the guitars devolve to prehistoric power chords.

There is, in a few exciting but brief passages, enough to suggest the potential for growth into a more mature rock band. But DLT need to inject some personality into their tepid lyrics, and challenge their listeners with more complex and rewarding song structures rather than rely on overdubbing and shiny production. Right now they melt a little too easily into the undifferentiated FM mass.