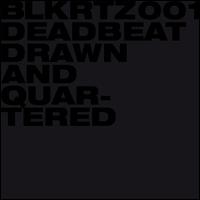 “Same-y” and “formulaic” are generally not the most accommodating reference points for anyone with a proclivity for reggae. Reggae has always been one of the world’s most willingly formulaic genres; it was the circumstances of the third world that built this monolith, something so hemmed-in and physically limited by cultural circumstance it could never have been anything but brutally honest in its simplicity, as much a product of the land as any good batch of homegrown.

So, much to my pleasure, Deadbeat’s most recent offering, Drawn and Quartered, released in June on the artist’s own Kompakt imprint, BLKRTZ (I’m willing to bet it takes a measure of deserved clout to convince one of the biggest electronic labels in the world that you’re just going to do your own thing and send them the bill, thanks), is something focused and successful in its plumbing of a genre deeply familiar at this point. At this point: one that has, through transformation and progressive influence, almost lost its own literal application in the hands of legions of artists looking to hang by a finger from the branches of reliable trend. Drawn and Quartered is just great dub in the tradition of the masters; you’ll be glad to know that there’s no need to waste time questing the void for the cleverest prefixes this time around. And really, what isn’t called “dub” these days? What method of making music today isn’t part and parcel of the methods that defined the early days of the craft?

I’ll let you judge for yourself as to where dub stands at the moment; it’s kind of a subjective, taste-oriented appraisal, but I’m just happy to hear that an artist as talented as Deadbeat’s Scott Monteith has bothered to stop worrying about organizing all of the links in an endless chain, about fashioning his own addition to a genre so already labyrinthine, to take a moment to step back and admire the original craftsmanship and singular, artistically miraculous circumstances that made the construction of that chain of influence possible in the first place. And it’s nice to think that Monteith isn’t asking you to translate his interpretation, instead sitting back with a megaphone in hand, confidently patronizing from the sidelines, calling forth classic plays from an apocryphal playbook written when the purity of the genre was yet uninterrupted by those without the time or desire to study up and get to know the real essence of the character at hand.

Drawn and Quartered, sectioned (natch) into four equally commanding twelve-minute creeper epics and one heavy ten-minute closer no less a force for the trim, sounds like the acid rain-soaked dubs of an extraordinarily stoned and dialed-in roots band lovingly recorded in what might have been a parking lot. Washes of static and liquid metal feedback billow like dirty velvet, parting for mere glimpses of traffic-like tech-tonalities; the drummer, eyes closed, shows no sign of letting off of the slow plod she’s locked into, and the disembodied horn players only remember where they are and what they’re doing about every fourth minute. Monteith’s deadpan perfection of classic steppers drumbeats is hypnotic on a level I didn’t remember was possible outside of ‘70s Jamaica since I last enjoyed the comparable mastery of UK reggae god Adrian Sherwood.

It’s probably a little unfair to compare Monteith to the originators, but there are certainly others like him, vets like Monolake, relative newcomer Deepchord, and respected minimal conservatories like Basic Channel, Chain Reaction, and ~scape, to name a few, all of whom have repeatedly made great arguments for the continuing relevance of the basest elements of dub in a world that seems bent on consuming the genre’s mutations and forcing it into spaces that betray its profound simplicity. Monteith sublimely combines his own live recordings (courtesy of a handful of accomplished Montreal and Berlin collaborators), grainy, modular atmospherics, and a purist’s tunnel vision to create a monumental ocean of sound that easily rivals any of his contemporaries’ finest works.

Like the earliest classics of dub itself and the best séances since, Drawn and Quartered pushes a compelling dichotomy of urban decay and pastoral reverence. It’s the panorama of future LA at the beginning of Blade Runner, all-encompassing machineries covering everything to the horizon and bubbling forth like cancerous growths, flames spewing from the tops of skyscrapers like geometric volcanoes filmed in slow-mo. The growth of the ordered, artificial, and technological over the substrate of that which is entropic, unbridled, and natural has only created its own kind of futuristic jungle, and the sound of that growth, both the celebration and mourning of that particular inevitability, was never better addressed than by dub music. Here, Monteith has made a striking and beautiful ritual out of his own heartfelt worship of tendencies that have complicated the world more and more since their recognition.

Which is what makes this greater than a history lesson, that Drawn and Quartered is an enjoyable and engaging enough listen to still be considered in the moment, a purification of timeless ideals not limited in any way by nostalgia. It proves with every laid-back snare crack that dub is still truly deserved of its title as one of the modern giants of genre, that the elevation of the producer to the realm of artist and originator, and the elevation of the studio from archival necessity to artistic instrument, is a transformation that is really unparalleled in influencing the modern soundscape, the tangible realization of a legacy that was only being hinted at by American pioneers like Joe Meek and Phil Spector. And in terms of brash confidence in their roles as artists and credit-worthy collaborators, Lee Perry, King Tubby, and Scientist have always had them beat hand over fist.

These torchbearers are really Monteith’s guiding lights, his hero worship consistently remaining something of the highest order. With that he delivers an intensely deep, personal, and rewarding work, his eighth release as Deadbeat, one that could be called the masterpiece of his ten-plus-year career. Other critics have gone as far to say that Monteith’s recordings are the ultimate line in the sand between those with a propensity for enjoying hypnotic, monolithic music, and those who feel the need for speed. For lack of a better description: Drawn and Quartered is just very much what it is, uninterested with anything else, and all the more complete for its disregard of anything other than its own self-righteousness. If after three minutes of the first track you find yourself asking what happened to three minutes, this is definitely not the record for you. But if you feel a twinge of impulsive excitement when the first guiro (a sort of tropical washboard, which makes a low-pitched, hollow springing sound like a frog call) scrapes across this foggy landscape, you’re in for the finest hour of dub this year (at least) has yet to offer.