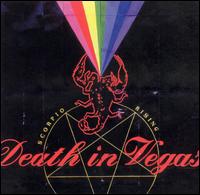 Does anyone here still like Primal Scream? Anyone? Oh well…I still like Primal Scream. With the exception of Evil Heat, Primal Scream evolved and experimented throughout their career. Their 1991 masterwork Screamadelica blended dance-hall grooves with 70s psychidelia; their brutalizing later material, ala XTRMNTR, combined driving techno beats with grating guitar attacks and dirty base hooks. In between these two albums, you’ll find shoegaze, Brit-pop, trip-hop, and more. So. At this point, you should ask: "Why all this Primal Scream talk? This review promised me Death In Vegas!" Well friends, Death In Vegas also blend electronica and rock; they also play with genres; they also import talent from other bands; they are also British. Yes, clearly Death In Vegas sweat Primal Scream. However, compared directly to the Scream, Death In Vegas sound like sad posers.

First, bands layer organic instruments atop electronic beats for many reasons. But most importantly, through layering, bands can construct intricate compositions from several simple elements. Primal Scream mastered this technique. Drop one beat, two beats, the guitars, the bass-line, the vocals, the countless samples…suddenly you’ve got a hott song! Death In Vegas, on the other hand, do not layer effectively. At best, their songs consist of three or four simple elements, making for predictable compositions. Ripe for criticism, "Natja," consists of only two elements! The band spends over three minutes looping the same wandering chords, until finally introducing a faint beat towards the end. For the love of God, this song boooorrrinngg. Even the best songs on Scorpio Rising are easily reduced to just a few elements. "Girls" builds from an electronic hum and breathy female vocals to an emotional climax, by gradually introducing percussion and guitar arpeggios. "Hands Around My Throat" most closely imitates Primal Scream circa XTRMNTR: dirty baseline and guitars, bitter British vocals, electronic bleep-bloop loops. "Killing Smile" makes for perfect dinner-music: lazy female vocals drift pleasantly over plucked guitar and sampled strings. These songs are cool and viscerally enjoyable, but hardly intricate. After just a few listens, you’ll have completely figured them out.

Second, why do bands blend genres? By juxtaposing the best elements from various different genres, bands can create exciting new sounds. The obvious, current example of genre blending is dance-punk. However, no songs on Scorpio Rising actually blend genres. Instead, the album resembles a mix tape, with every song securely moored within its single genre. "Girls" is pure shoegaze; "23 Lies" rips off Massive Attack style trip-hop; "Scorpio Rising" and "So You Say You Lost Your Baby" is Brit-pop lite. In other words, Death In Vegas have produced no new exciting sounds – they’ve merely replicated old sounds.

Conclusion? Scorpio Rising consists of some enjoyable tracks and some big fat duds. I’m even willing to argue that the album’s good moments outweigh the bad. However, Death In Vegas lose serious points for copying previous bands, without making any attempt to improve upon these old sounds. While writing this review, I found myself constantly popping Primal Scream and Massive Attack into my CD player. I couldn’t help myself, because the similarities are painfully obvious. Don’t get me wrong, I don’t mind derivative music. However, bands should make some attempt to improve upon their influences Sorry Death In Vegas, not only did these bands chart your territory years ago, they did it better.