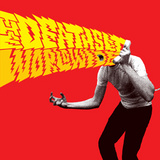 Wait, wait, WAIT a minute: I hate punk. I puke on punk’s pathetically disinterested pseudo-nihilism and fashion-centric contradictions; I pitch its oppressive anachronisms and fascist crowd’s coordinated stomp into a void of yawns. I noogie the mohawked head of its white, suburban romanticism and knee it in the junk of its belligerent, anti-musical stance. I have little patience for its bloated caricature, nor its obscured footnote in music history, because I don’t see much beyond the fact that the Monks sound good on vinyl and that post-punk wouldn’t have been possible without punk to move past. The most rebellious thing left is to go conservative and piss off your baby boomer parents. In fact, it’s hard for me to even sympathize with the viewpoint that punk has a political or cultural impetus for existing in the year 2008, or with any viewpoint that asserts punk’s importance beyond liking the way it sounds or a Dirty Projectors-style identification with something now elusive and perhaps even laughable. At least heavy metal is unapologetically boneheaded; punk is about as current but with its head up its ass.

Please welcome Baltimore-ian by way of Australia duo Johnny Siera and Beau Velasco: they play songs that are usually less than two minutes long, and they’ve very punkishly called themselves the Death Set. (Or, as multiple songs attest, “The motherfucking Death Set.”) What the hell am I supposed to do with the fact that Worldwide, as feverishly outmoded into surplus status as it is, is also unavoidably fun? That replacing three-chord haze with Casio bleepity-bloopity actually works? There’s nothing close to ambition here, but of course if there were then this wouldn’t be punk. Instead, the Death Set keep it fast and loose, fun and carefree, funny and self-aware. In other words, the Death Set amplify the echoes of punk’s death rattle to distorted heights and thrash out a tribute to nostalgia and kitsch. It’s the best punk fans, poor misguided souls that they are, can really ask for.

The album is generally divided into two halves: an “electronic,” or DIY/lo-fi punk-with-keyboards side, and a more traditional guitar-and-drums side. The first side is infectious, fun, spazzy and danceable punk, with “Negative Thinking” and “Around the World” high points of melodic brushfire—a ten minute solid tear through paper-thin ideas that are loaded up and blasted with cluster-bomb-accuracy in the general direction of the listener. The second side proves just how redundant and boring fuzzed-out bar chords have become, positing attitude with all the stylistic resonance and artistic relevancy of a themed restaurant for vacationing Caucasian families. Worldwide‘s second half doesn’t last long enough to grate, what with the whole album clocking in at less than thirty minutes, and doesn’t grate enough to last in anyone’s mind.

Still: the Death Set’s best moments are breakneck pep rallies in the vein of the Go! Team’s actual performances (as in the album where they played their instruments instead of their far superior assembly of obscure samples). Worldwide‘s participatory highs are intense, if fleeting, and that cover would look amazing on a t-shirt. We’ve heard it all before, but hey, we all still wear t-shirts, don’t we? At least three or four tracks are mix-worthy, contagious freak outs that testify to why they’ve been called one of Baltimore’s best live bands, but this Happy Meal of an album won’t be nourishing the next generation of punk munchkins come teething season. We’ll leave that for the next wave of punk’s melancholy historians and self-styled party animals.