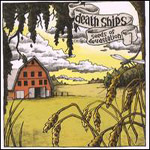 There are several strange and well-known characteristics of college-town life, especially in the Midwest. Kids who will seemingly grope anything while drunk can’t look each other in the eye when sober; hip kids at record stores and coffee shops want to be anywhere else but can’t ever leave; everyone is liberal in a state full of conservatives; the town is boring but we’re staying up all night; everyone has friends yet everyone is lonely, etc. And that makes it a veritable breeding ground for the type of material that makes damn good country music.

Which makes getting to know Iowa City’s Death Ships a little bit about shattering expectations. Where you might expect a band in a college town fronted by an indie record store employee to be an art-rock/noise project or something dripping with irony and pretentiousness, Death Ships’ debut, Seeds of Devastation, is a very clean, very honest alt/pop/rock/country record. They’ve harnessed all the tragedy and irony and joy in small-town life, and in doing so, they’ve achieved, however modestly, something that we non-artists assume all bands are striving for: a specificity that sheds light on larger human experiences.

Album opener “It Remains to be Seen” is indicative of these themes. A line as simple as “People pass you without glancing / And you’re underpaid and tired” is as true in Iowa City as it is in New York City, but the rest of the song makes such generalities effective rather than meaningless. An acute sense of self and cultural awareness distinguishes the track, and sets the tone for the album: “If you don’t already know who you are / it’s ‘cause you wanna / slip beneath it all.” The lap steel, played by Troy Stains, adds just the right Jayhawky vibe, and while “second verse same as the first” works for this particular track, it is a marker for the predictability that it is the album’s weak spot.

“Little Mystery” starts off as country Afghan Whigs, a little electric riff and acoustic strumming as singer Dan Maloney croons “I’m a man that you need,” and “I will make you come inside.” But where Greg Dulli might launch into a testament to masculinity and cocksureness, Death Ships reveal those lines as a façade that cover feelings of desperate insecurity and yearning. The confidence shown early becomes a problematic, likely foolish attempt to convince a “little mystery” (and we’ve all had one) to open up to us, a process all the more frustrating since we know it will fail in the face of our egomania. The song ends with the repetition of “[I’ve] got a whole lot to offer,” as much a lament as a plea.

“Story Never Gets Old” directly challenges Death Ships’ genre classification, since it is essentially a ‘60s pop song. At the song’s foundation is Ofer Sivan’s simple, bouncing piano riff, supplemented by double-tracked lead vocals and various other voices helping out in the chorus and bridge. By the time we get to the climax of this thing, the piano is in full-force, guitars have added their presence along with a muted trumpet and cymbals, and everyone is singing along. The song’s denouement strips most of those elements away, until we are left with piano (now sounding almost honky-tonk) and the acoustic guitar, reminding us of both where we’ve been and where we’re going.

Unfortunately, that path changes a bit with “Knocks Over Time.” The album’s closer is certainly the most “rockist” of the songs here, and ultimately suffers from its own desire to be an anthem. The vocal and guitar distortion that come into play here are tolerable, if uninteresting elements, and their arrival on the last song seems odd since this type of aesthetic is virtually absent in the rest of the album. The vocals do showcase Maloney’s low-range (not Crash Test Dummies low, but think the guy from the National), yet something with this track feels unsettling; after taking us so far through this sexually charged, lonely, political, and emotional journey, someone changed their mind and wanted to rawk! Which might not have been a bad thing, had these elements been sprinkled throughout the disc, although that move itself risks embarrassing consequences for country-ish albums (the Elected’s Me First comes to mind).

For all of the benefits that come from music that seems so tied to place, Seeds of Devastation also suffers from some of the predictability and repetition that plague any town. Maloney’s voice, which is always at the very front of the mix, has character but not quite the range (or lack-of-range-quirkiness a la Tweedy) to carry the record for its whole length, and the rhythm section could use a boost. Lyrically, the album can lean toward the simplistic side, but I can’t imagine these songs being sung with any other words.

Seeds of Devastation is a type of still-life with accompaniment. With impressive scope and musical dexterity, it shifts its focus (perhaps unconsciously) from peep-hole to bird’s-eye-view, from charged political narrative to musings on cities and relationships, offering us a varied and refreshing perspective on modern life. Replacing postmodern distance (okay, the name is certainly a joke) with a sense of place and honesty, Death Ships debut is a vessel that should carry them well beyond the confines of Iowa City.