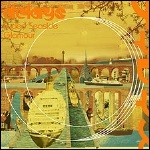 It is my goal, in taking this upcoming fall course, to use this study to not only research but criticize and offer new insight into the three most common theories on the origin of the now-defunct British pop three-piece the Delays. Formed in 1996 and eventually signed to the Rough Trade label, the group released their debut record, Faded Seaside Glamour, about eight years later. Due to the kind of psychotic fans they had attracted in the years that followed, the group was forced to disband in 2006 after some close calls with stalkers, and never got to finish their second album. However, many of their devoted fans - the kind that forced the band to break up in the first place--have spent the years in their absence trying to explain where exactly the group came from in the first place; "out of nowhere" quickly became unacceptable, and answers were, for one reason or another, demanded. As it is clear to see, very few could agree on the subject on what stands as one of the strangest sub-cultural movements from a century that has certainly seen its share of them.

For now, let me bring you over these three leading theories, giving a brief overview of their argument, outlining their most convincing argument for and the most popular criticism against their fundamental points, something which I hope to flesh out during the semester.

Brief Synopsis: Followers in this thought believe that Delays front-man and primary songwriter Greg Gilbert actually descended from an extremely well covered-up celebrity conception that somehow involved the seed of Stevie Nicks, Lindsay Buckingham and Christie McVie. It is believed that he was miraculously conceived during the creative spurt that would result in their biggest record, Rumours. The child, after years of being force-fed Byrds & Gram Parsons records by his adoptive father, would become a '80s & '90s indie and commercial rock-pop junky, falling in love with bands from The Las, Mansun, the Pernice Brothers and the Cocteau Twins to '90s pop fads like Gin Blossoms and Gay Dad, as well as a slew of at-the-time contemporary British acts like Muse ("a vocal influence," it was explained to me; "just listen closely to 'Wanderlust' or 'Bedroom Scene' and you'll know what I'm talking about") and, to a lesser extent, the Doves. It would be this combination of AOR genes and a strict musical diet driven by stubborn tastes that would ultimately catalyst the group's sound.

Argument For:
- The uncanny resemblance--both in the songwriting and sporadically in the voice--to all three fronting members of the popular '70s soft-rock group; see: "Long Time Coming;" the bridge of "Hey Girl;" "No Ending;" all lyrics. Also, very clear connections to all of the retro and contemporary artists they claim the child would have grown up listening to in different stages of his life.

Argument Against:
- The most common and persuasive, as one unbiased person eloquently stated during a series of random on-the-street interviews that I recently conducted: "Yeah, but. . . three parents? Come on, dude, that's just fucking stupid."

The "Fated to Save British Pop" Theory

Brief Synopsis: Belief that Gilbert, bassist Colin Fox, keyboardist Aaron Gilbert and drummer Rowly were, from birth, meant to be the "saviour of British pop for the next generation." They argue that had the band not been forced to break up when they had, they would've gone on to fulfill their destiny as it was outlined for them in the cosmos (their words, not mine). "It's ridiculous if you think about it," argued group leader Stephen Wells. "We simply couldn't believe that people were seriously saying that it was a Fleetwood Mac kid or was sent by aliens from some far-off planet. It's just all so unbelievably insane. No, we believe in divine will, and this band was meant, for reasons both unknown and unimportant, to save British pop music. They had the vocalist, they had a natural talent, they had the hooks...all they needed was a little more time to write a really solid batch of songs without the odd dud like "Stay Where You Are" or "One Night Away." They just never got a chance to truly do it." He paused for a second of thought and then concluded, "but I mean, what else could it be? We're almost proven right just by common sense, you know?"

Argument For:
- The "we win by default" argument stands as the only somewhat convincing selling point, but apparently it has worked well enough to convert several theorists.

Argument Against:
- It isn't really explained how they were able to change their fate (assuming you actually believe in it) merely by breaking up the band, or why a band that amazing would've released such a hit-and-miss debut.

3. The "From Southampton, You Fucking Idiots" Theory

Brief Synopsis: Pioneered shortly after the first wave of theorists began to be recognized for their "work," this thesis consists of a swift, confident answer to the whole problem. One theorist explains: "What's to question here? They're just another rock-pop group that loved MOR ''70s rock and that late '60s/early '70s psych-country movement. Bottom line, though: they didn't come from some three-way Fleetwood Mac orgy, they weren't fated to save anything, they didn't evolve from aliens...they're just a couple of guys that were in a slightly above-average group from a musical scene that loved its pop music. In fact, there was really nothing out of the ordinary about them. I mean, they were pretty good--that song "Hey Girl" should've been an even bigger single, as should have "Long Time Coming" and "Nearer Than Heaven"--but what's the big deal? The Beatles probably didn't even have to put up with this kind of retarded shit, and they actually were phenomenal. Besides, Greg Gilbert's voice was the only reason they were half-way decent in the first place. Without him, they would've just been another flash-in-the-pan perma-opening band, if they would've even been in a band at all. You don't see anyone going apeshit over the drumming arrangements, do you?"

Argument For:
- Their "what's the big deal?" platform does base itself in reality and common sense, which is refreshing.

Argument Against:
- "Doesn't really add any mystique to the group at all now, does it?" pointed out one FMO theorist, all but making their point for them. "The one thing this band needed was some sort of edge, and if it wasn't coming from the music, where the hell else do you suppose we're supposed to get it from? Like that old rumour about James Taylor. You know the one, where he supposedly once recorded an unused percussion track by placing a microphone on a wooden floor and kicking the dead body of his former manager. They need something. Anything."

It would seem, after some preliminary interviews and minimal research, that there is only one thing all involved could agree on: "Had more bands like this infiltrated FM radio," summed up one talkative patron of the "Fated" school of thought, "at least the bar might have been set high enough to make most casual listeners expect more than that putrid Maroon 5 or Train bullshit they used to have to put up with, back when radio actually played music." A "From Southampton" theorist added, "he does have a point in that very few prefab, slick commercial rock bands could write an album nearly as solid or compelling." He later added, with a sizeable grin beaming at me with great satisfaction, "but Maroon 5 got theirs in that freak camping accident, though, didn't they?"