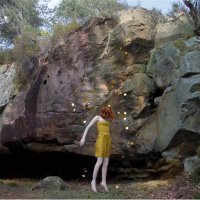 We Ottawans have just survived our wettest and second-coldest July on record. Granted, I’m the first to bemoan even appropriately seasonable warmth—my stubborn refusal to sport sandals or shorts across the sweatiest afternoons is always a source of dread—but after two months of drizzle and drear, we’ve settled into a melancholic little rut in the season’s absence. So, when the sun finally, surprisingly hit hard last weekend, the gloom was alleviated and the heat was embraced: we need this shit to feel good. Weekend barbecues, chlorinated poolwater, Bud Light Lime—not just vacuous fun, these are sources of mental rejuvenation. And, of course, summer needs a soundtrack; though we suspect music to have seasonal significance, we’ve rarely lacked a genuine summer month to test the theory. Wolfgang Amadeus Phoenix dropped as the winter was melting away, and whatever warmth we could temporarily soak in was ample for “1901”‘s apropos sizzle. Finally, for some summer jam candidates that hadn’t yet had the opportunity to click, this weekend was their show.

Is there a style more hot-appropriate than anthemic electro-pop? Delorean’s Aryton Senna EP follows Cut Copy’s example closely by suggesting, none-too subtly, that breezy New Order chic-appropriation has real beach holiday mileage. If my Last.fm charts are any indication, In Ghost Colors was 2008’s definitive summer listen, dominating my charts through the warmest months and relinquishing its #1 spot only as the evenings cooled and the autumnal malaise set in yet again. Is there something inherently pleasing about just this sort of lush, vibrant fluff? Some intrinsic appeal? Upon hearing it for the first time, Boogz was heard to remark that he wants “every band to sound like this forever,” and although he was (presumably) being facetious, I can relate with the sentiment: Delorean does what they do better than just about anybody else, and what they do is done these days by just about everybody. Attempting to channel some essentially appealing pop essence is at this point a tired and frustrating strategy, and this year’s efforts—Passion Pit and Discovery are the biggest offenders—have been particularly redundant. Yet, Delorean, remarkably, have done right by pop. Aryton Senna is broad, dumb fun, but it’s also immaculate and deeply considered. In short, Aryton Senna is delightful. And that’s not a statement I often make without qualification or exception.

Okay, a little exception: lead single “Seasun,” here presented both in its original and remixed forms, is a tad dull and more than a dollop of precious. But then bonus cut “Big Dipper” has an almost compensatory immediacy that’s as refreshing as it is arresting. If the Juan Maclean can be credited with re-popularizing the traditional house piano line by way of last year’s near-perfect “Happy House,” “Big Dipper” is perhaps proof that the gimmick is now an outright trend, though Delorean’s generous approach to composition gives their take a sense of space that “Happy House” sorely lacked. That brazen grandeur and whimsy make Aryton Senna, at only five tracks and barely 25 minutes, seem surprisingly enormous, and though Delorean here pull it off confidently, it’s unclear whether they’ll have the stamina to maintain such momentum over the course of a follow-up LP. But until they tire or the shtick wears thin, this is the summer poolside record of 2009. Enjoy it in these last moments before the swelter clamps down.