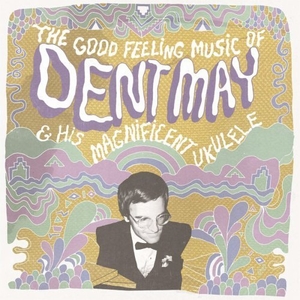 Dent May & His Magnificent Ukulele

The Good Feeling Music of Dent May & His Magnificent Ukulele

About half-way through The Good Feeling Music of Dent May & His Magnificent Ukulele (guh), May trots out the affirmation “You can’t force a dance party, but for you I’ll try.” This seems like an odd time to drop that lyric, as, up until that point, Dent May has been forcing whimsy and charm down our throats. The logical conclusion of this pale-faced, cardigan-swathed come-on is not, we hope, the ineffable urge to sleep with him, but Dent May, in my mind, assumes this sentiment will necessitate that urge anyway. Whether we like it or not.

I do like much about Dent May’s music: how his production is never as obtrusive as the ideas and melodies it restrains, or the generally unadorned competence at work. The pre-chorus to “I’m An Alcoholic” alone defines the graceful breadth May’s compositions could reach if he ever went for something swarthier, something less tethered to the whole Magnificent Ukulele shtick. It’s not difficult to guess what this album will sound like: May’s brand is an amalgam of ragtime, showtunes, power pop, and craft fairs—absolutely nothing about how the album is named, presented, wrapped, and marketed will refute that. But somewhere along the line—within a biography meant to accompany him wherever he goes—May went from art student to full-fledged signed, touring band, and at no point, as all this money and effort and ingenuity was invested into making this album and this review and this experience possible, did anyone stop to question Dent May. To ask him why.

There is nothing magnificent about Dent May’s ukulele, which is unfortunately at the core of both May’s appeal and of his music’s longevity. What I’m not saying is that magnificent ukuleles need to make magnificent music, because what may make a ukulele magnificent—in this case if it were made out of glimmering unicorn bones, say, or humility—is not necessarily conducive to the magnificence of the person playing it. Dent May has a firm grasp on his ukulele, debuting his skill through an adept, kitschy, brief, and rarely but sometimes resplendent album, but he’s still forevermore a novelty. Probably puts on one hell of a live show, and when he comes to town I’ll be first in line to get a ticket for what will most likely be a very congenial night. Where he goes wrong—follow me, here, into cynicism—is in conflating the predominance of the ukulele as conceit with the pleasure and worth of the music itself. Perhaps in warranting stringent rules around his sound, May seeks to unearth a unifying retro-persona that, he thinks or at least must think, quantifies all those, erm, hipsters he writes about. May has a lot of inoffensive machismo to spread around, scooping into each ambitious phrase with a dead-serious croon and then leaving room for a wink, but his thematic goals are mostly mired in middle-class, white, post-college junk I’d rather forget than sympathize with. Even then his whole vocal delivery, as loud as it is, becomes subsumed by the blanket of kitsch that long ago must have made Dent May’s friends kinda hate him.

Or not. The niche market targeted by Jens Lekman and Beirut (and only them) could, no doubt, stomach this. And enjoy it. Which I have nothing wrong with, though I find the music of those two artists so much more rewarding and adventurous—never, most importantly, sunk by a persistent, maybe ridiculous, at least done before aesthetic. The dopey showmanship of “Welcome” manifests as you might expect; “College Boy” amounts to an interstitial Family Guy joke, a shuffling autumn-tinged singer/songwriter song about the very dudes that validate this stuff. Then, of course, we return to the name of his band, one that can obviously be interpreted as ironic, obviousness being something Dent May likes and irony slathered all over this stuff like butter on an ear of corn. But soon everything tastes like butter and the taste of butter becomes meaningless, until the very essence of the corn is characterized and its existence justified by butter. I enjoy butter and I enjoy Dent May, but…what were we talking about again?