1. Would You Rather be Followed by Forty Ducks for the Rest of your Life?
2. Misspelt Dutch Architect
3. POP
4. La Guerre des Mondes 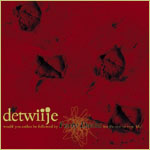 Would You Rather be Followed by Forty Ducks for the Rest of Your Life?

Okay, so look at the title of this album. That’s the kind of unbelievably long, seemingly superfluous title that doesn’t even really warrant an acronym, because the acronym (WYRFFDRL) is so unbelievably long itself. You can’t condense Detwiije’s newest album into more useful nomenclature. Hell, the title is so long that it alone might turn off prospective listeners who’re used to that kind of thing from pretentious indie acts.

Yet it’s tempting to attribute all of that added difficulty to a keen self-consciousness of genre; nearly every aspect of Detwiije’s title can be easily inflected onto their chosen genre of post-rock. Too long. In need of condensing but not really worth the effort. The implications alone of the words “post-rock” are enough to send prospective interest fleeing for more straightforward music, and likely with good reason.

Oh, and the band’s name is nigh-unpronounceable to most of the audience it would most likely reach. Oh, and the album’s four songs average ten minutes each. Phil Elv(e)rum’s charming nature concepts aside, I don’t know of a worse marketing strategy than “we’re an ornate post-rock band with an unpronounceable name and impossible title.” And I was about to give you two guesses as to why they’re nearly completely unknown.

But there are times when a gauntlet like that is thrown down and you just have to dive into the challenge. In Detwiije’s case, their sophomore album (preceded by the smart and titularly brief Six is Better than Eight) is an almost implausible gem of post-rock from a mine that started out too shallow and had too few yields to begin with. If no one’s shut it down, it’s probably because most people have forgotten about it.

The success of Detwiije’s sophomore album is easily attributable to one thing: superb dynamics, which means development, musical logic, real tension, variation, and surprise. Most post rock consists of a steadily, predictably developed refrain with one or two variations which inevitably erupts into a cataclysmic conclusion. And that’s fine, but the reason you don’t come back to it is that once you’ve actually heard the catharsis there’s no real further tension created within the song to interest you. It’s a lot of…stuff, and an exclamation point for which you don’t feel like waiting several minutes.

But there’s surprise and dynamism all over (fine, I’ll write it) WYRFFDRL, of the sort that makes you truly want to revisit each of its tracks. Internal rhythmic complications, melodic guitar interactions, and delicate tensions evolve throughout the songs like entwining coils of ivy, and with such subtlety in shifts and tone (literal and figurative) that initial listens hardly scratch the surface of these compositions. Nearly every time you listen to them, you gain an ineffable sense of their beauty and power, but are nagged by the pleasing thought that there’s still more to discover.

The opening title track makes perfectly clear exactly how simultaneously intelligent and visceral the experience will be, sparking the album with off-time drum beats that are deceivingly difficult to pin down before going through 3/2, 6/3, and a host of other time signatures. Ignore the math and you’ll hear a highly delicate interplay between deftly plucked guitar and violin that’s beautifully elevated by squalls of six-string melody, rhythm dutifully keeping complicated time. Then, both guitarists, Ben Levy and Al Harle, build different, interacting guitar lines to play off of the tense violin refrain before – with admirable preceding restraint--really letting their electric lightning loose. But unlike most of their peers, they keep the explosion surprisingly short and revisit the real strengths of the song--its melodic development and interesting pacing.

Equal skill and beauty accompanies the more deliberate, semi-symphonic “Misspelt Dutch Architect,” and the group proves that, if it wanted to, it could nail instrumental pop in a can with, you guessed it, “POP.” One could go into analytical fits over each of them, as well, but I’ll spare you.

Well okay, but I can’t resist it for closer “La Guerre des Mondes.” I can’t help it. I don’t think I’ve heard a more excellent post-rock song, and it’s easily one of the best songs of any kind yet this year. Beginning with a serene set of plucked guitar thirds, and a wispy backgrounded guitar hum, Ellie Wilson throws the song into a swoon with her gorgeous violin-bowing. Then, with hardly a breath, the band switches to enveloping percussion around complicating melodic chording, and thence into urgent rhythm that grows like a crackling leviathan, as guitars start taking over with stratospheric work, and just when you think the whole structure can’t possibly sustain itself, the group revert back to the plucked thirds. But this time, the guitarists throw in rhythm guitar strums, and bass and guitars come to the fore, leaving Wilson’s violin to the background (this is what I’m talking about when I speak of dynamics). A cataclysmic conclusion does arrive, but it’s not just a volume-monster; rather than merely punctuating the song’s sentence, it, too, develops its guitar dynamics to transcendent, howling heights before a melodic cascade brings the whole thing down to a waiting bed of lulling violin and bass. Nor does the song merely exhaust itself there, but continues developing until its thunderously good bass-beating, violin-lifting, apocalyptically wonderful ending.

My review’s run too long, but I can only blame it on Detwiije. Their music is thrilling to dissect and talk about, but most of all, to experience. I could’ve tossed off a complimentary, briefly digestive review, or I could’ve done justice to this band and tried to communicate precisely how strong and enveloping their music is. In the same way, Detwiije could’ve tossed off a passable set of instrumental pop tunes, but instead, they went through post-rock--the most apparently dead and most completely unmarketable genre--to get to excellence. I suppose small miracles can happen.