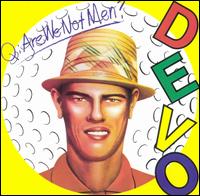 I saw that you were asking what we (readers) would like to see reviewed, and I can’t say that I wouldn’t LOVE to see some of my favorite bands/albums reviewed, but there’s just so many stuff that I’ll limit myself to say that I’d love to see the first (or all, or just one, whatever) Devo albums reviewed.

A year before Gang of Four’s Entertainment! and Talking Heads’ Fear of Music, five young men from Ohio with an impressive collection of funny hats managed to get a few minutes of Brian Eno’s time and came up with a pretty fantastic debut record. Playing the geek card, riding synthesizers (though still relying on guitars), and yelping for their lives through a brutal cover of “(I Can’t Get No) Satisfaction,” Devo managed to nail that late-‘70s neurotic brand of punk rock on their first try.

Sure, these guys would have been dead in the water if the critical press hadn’t already had David Byrne shrieking and yapping his way through Talking Heads ’77 and More Songs About Buildings and Food, but Devo were willing to take it even farther while the Heads brought it all together for Fear of Music and Remain in Light. Songs like “Mongoloid” and “Jocko Homo” earned Devo their reputation as complete weirdos, but they weren’t scared to show that they could rock too, “Gut Feeling” and “Uncontrollable Urge” serving as the best example. Punk rock for people with thick glasses and a PhD.