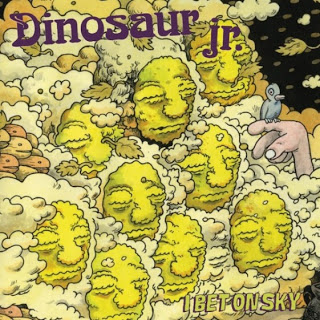 I Bet on Sky

We’ve been spoiled by Dinosaur Jr. Their 2005 reunion was such a surprise, not only because it came before the wave of ’90s indie rock reunions of the past five years, but also because of how vital the resulting album, Beyond (2007), turned out to be. And they didn’t stop there. In 2009, the original trio of J Mascis, Lou Barlow, and Murph released Farm, another dynamic record that harkened back to the sound of their late-‘80s heyday. So it was inevitable, then, that the band would have to come down from that post-reunion high. This is not to say that their latest effort, I Bet on Sky, is bad or even mediocre. It’s good, of course, because Mascis, Barlow, and Murph are just good at what they do, and they’ve clearly found the functional inter-band balance they lacked the first time around. But it seems there’s been some drifting: Mascis released a solo record early last year, and Barlow has since reteamed with Sebadoh for some new recordings. (Murph has been keepin’ it real, as always.) And thus the energy and focus that made Beyond and Farm such fantastic records has diminished slightly on I Bet on Sky.

I Bet on Sky is not at all a departure for the band, and delivers that classic Dinosaur Jr. sound easily—perhaps too easily. As much I want them to never change, stay cool forever, etc., listening to this record makes me wish they would experiment with their sound, or unleash it rather than restraining it. The first half of I Bet on Sky has a somewhat off-putting, compact perkiness to it, only skimming the surface of the band’s more languid, swampy tendencies. “Almost Fare” in particular is bouncy, nearly bubbly, despite its Nirvana-esque melody (and I’ll just say that sometimes it’s a good thing that Mascis’ lyrics are so unintelligible). “Watch the Corners” is a near-hit, but its soaring chorus plays more like a coda, and the shredding is sadly kept to a minimum. Here’s where the record lacks some of the freshness of Beyond and Farm. It’s a bit less memorable and satisfying, and none of the songs land as sure-footedly as recent tracks like “We’re Not Alone” or “Said the People.” This slightly sleepy feeling is only really shaken towards the very end, when the guys seem to be having more fun.

I Bet on Sky is heavy on the Mascis but for two Lou Barlow tracks, “Rude” and “Recognition.” Though Mascis’ sound has long been dominant in Dinosaur Jr. (a primary source of conflict), Barlow’s work always provides a dynamic contrast, with his anxious energy and crisp, downright pretty vocals. Their differences are clearly apparent, but it’s the areas where Barlow and Mascis overlap—those moody, unsettled melodies that oscillate gracefully between beautiful and ugly—that shine through, and really make Dinosaur Jr. the great band that they are. It’s also the reason why Sebadoh, with its interplay between Barlow and worthy adversary Jason Loewenstein, made better records than the Mascis-controlled, post-Barlow era of Dinosaur Jr.

That said, the finest songs here do tend to feature that ooey-gooey Mascis croak, the one that can sound so desperate and plaintive and shrugging and strung out. There’s really nobody else like him, and when paired with the right sound, his voice can make time slow down (much like his transcendent guitar work). “What Was That” is a perfect example, a combination of a great drowsy vocal paired with chiming guitar that sounds like “Just Like Honey” on sedatives. What sets “What Was That” apart from much of the material on I Bet on Sky is its complexity—as the song progresses, the catchy lead subtly shifts, until at the end it becomes shrill and cutting, like an alarm. The record’s other clear standout is the closing track, “See it on Your Side,” a long, woozy track drowning in Mascis’ famous whirlpool of guitar. A cousin to “Turnip Farm,” “See it on Your Side” really redeems I Bet on Sky because it encapsulates all the things that the band does so well. It feels more relaxed than the rest of the record, less like the answer to the request “write a song.” It’s a jam but it gels, it’s dirty but pretty, and it scratches that particular Dinosaur Jr. itch that’s been creeping in since Farm.

There’s no doubt that I Bet on Sky is a very good record. But at this point, the second honeymoon is over, and there’s a barely perceptible distance growing—between the bandmates, and between the band and their audience. So far, it doesn’t matter much, as these guys are capable of writing and playing great rock ‘n’ roll with their eyes closed. But you know what? I’d prefer they do it with their eyes open. They’ve shown they have the capacity to blow us away, and though it’s unrealistic to demand they do it every time, I would like them to do it again. So you can have this one, fellas—until we meet again in, say, 2015.