1. Somewhere By The Sea / Balance The Balloon
2. Sirens In August / My Shaggy Parasol / When The Sun Sets Over The Yard Arm
3. Before The March / Strawberries And Steam
4. They Came Alive
5. Some Eve With An Apple
6. Dreams Of Donnybrook
7. Two Years Today
8. Around Twilight
9. Pork And Honey 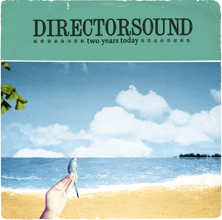 If “Best Happy Antique” were a Grammy award category then Swedish imprint Tona Serenad would have a trophy cabinet like no other—when the label wheezed brightly to life last year it seemed to flow from a cabin in the Tylöskog forest, and in this cabin sat a man carving instruments, whistling to bumble bees and moose. The rest of the world was a noise he couldn’t hear yet and he was probably still fighting a war; the 1808 one with Finland. Back in the present but occupying his wavelength, Tona Serenad unboxed brilliant relics from wunderkinds Musette and Molnbär av John, then tapped into the warblings of one Anne Laplantine: a former one-woman synth ensemble who quit music to play games of Go. Eighteen months after the first delicate crackle Tona are getting ready to introduce Hermit #2: Nick Palmer aka Directorsound, another artist who fled to a cabin in the woods with only a carving knife, gas block, and wax cylinder. Despite previous releases being picked up by Domino, Palmer has spent the last few years in hiding, self-releasing CD-Rs at a prolific rate to an enraptured audience of none. Tona Serenad tracked the outsider and moved him to the same brook as his labelmates, where he now mixes the same brand of pre-war orchestras with the birdsong of his native Dorset. He also mixes in a some cross-toothed optimism for good measure to form one sun-drenched and clean-living masterpiece. Piss on that, the future!

Palmer favours movements over conventional pop lengths, kicking off his record with some overlapping sketches that twang with an analogue euphoria. Drums brush like spring tides on “Somewhere by the Sea,” where a broken piano gets rendered cute by guitars that turn it into a Chaplin soundtrack. This then ebbs into “Balance the Balloon”‘s jazz and its carefree battered old harpsichord, completing the piece with a sprinkling of everything from banjo to washboard to theremins. These stylistic overlaps with Musette’s goofiness are plain for all to see, but the Directorsound approach is a little more rounded, fleshed out with numerous French jazz films and scored so beautifully they’re beyond parody. This is music that a tramp might like to whistle, but tramps from a happier era, back when you used to cook them a meal provided they helped dig your garden.

What also catches you on Two Years Today is its level sophistication, both in its mix (you need this record if you want to level your speakers out) and production: for a record purportedly created in solitude there’s a lot of good manners on display here. The music box melody of “Dreams Of Donnybrook” is a more freckled version of the Big theme, before David Moscow expanded. This one does follow pop conformity, and halts itself inside of the four minute mark, having cooed all your woes onto one pillow. As with several of TYT‘s shorter tracks it’s a cathartic little cocktail you want to swallow in one gulp—cherry, umbrella and all. The sophistication peaks again on “Around Twilight,” which has nothing to do with tweens and eyeliner and more to do with milk teeth heartstrings, pulling at both lullaby moves. That’s where the cuddles and talcum powder stop, however, and Palmer is quick to shake out his feet, bending Mediterranean sitar patterns into the tango rhythm of “They Came Alive” and all its accompanying KGB tones. Even the drowsy harmonica of the title track defies itself through wurlitzers and soft-soled electric guitars.

You can only assume that whatever Directorsound did two years ago it obviously filled a deep well in his brain, one which he can retrieve all kinds of findings from whenever he lowers the bucket. If Akron/Family’s Seth Olinksky had been gagged and shot with morphine for a year this is how he might view the world: bright, inviting, and speckled with harmony, more than just four walls and two plug sockets. Palmer manages to bring a big spectrum to his record, pulling everything from Roxy Music in fedora mode to frauleins doing the Wicker Man dance. While most of us spent our childhood Sundays losing homework and planning school bus sabotage, Palmer was somewhere in an empty meadow with his ear to the ground and glockenspiel. This feels particularly true of the closing track “Pork and Honey” where parting flutes twinkle around guitars, and where Palmer drags a jazz musician into a corn field and says, “Play at the speed of that sunset.” As the lounge footsteps fade into the sound of crickets you want to run out and hire a bicycle, peddling away to the place Palmer goes to, the Land of Accordions Made Listenable. This is where Tona are comfortable treading and getting a little more serious with each trip. Maybe next time they’ll even experiment with lyrics. Accordions and words sung in Swedish—if you busk but studied Modern Languages, you’ll get it.