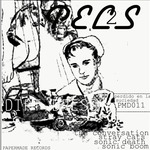 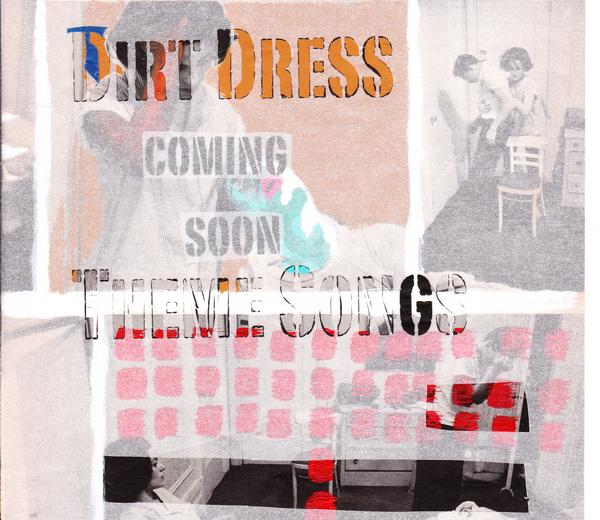 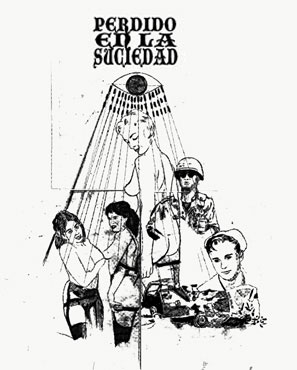 First impression of this fresh EP cassette from CMG-adored LA new kids Dirt Dress says, “hey, this is kind of great.” Though lacking the glint of highlights like “Transmissions” and the weight of a lengthy narrative track like “Peter and the Wolf” from last year’s NBH-defining Theme Songs, Perdido en la Suciedad sounds like the beginnings of an unmistakable groove (this EP first in a tripartite series planned for ’09). And its title means “Lost in the Dirt,” which is also kind of neat—both in how it plays off the band’s name, entrenched as they are in their own style, and how it touches upon a running theme of self-absorption, of becoming lost in one’s own material/physical desires and “Dreams,” and how all of that amounts to “Junk,” “Dirt,” etc. Which explains why the artwork looks like the pin-up collection of an old army man. I think.

By all means, no absolute statements, not yet: Dirt Dress feast upon all the maybes, somewhats, and sortas that you can throw at them. In my review of Theme Songs I framed the band with the critic’s “introductory rave” option #1: a run-through of their influences and then their somehow, someway transcendence of that run-through’s confessed reduction. Here Dirt Dress give us another brief glimpse of who they are, confirming what first glance seemed to tell us—these three dudes are more than some hip Velvets/TVP/Modern Lovers hybrid, more than the sum of their parts, more than another group for us to easily categorize and qualify. And that has to do with just how effortlessly this intrepid trio navigates an expanse of gray area.

Perdido en la Suciedad is kind of lo-fi with tape hiss throughout and the reverb warbling close to slop while the levels are just all red and fucked (but in a good way); it’s also kind of epic with Noah and Jose’s guitar tones cheap yet sublime, Raymond’s drums fervently believing in the songs they’re backing, a handful of chords that lope then bicycle deep into some recess of your consciousness. It’s kind of casual, like the way a shit-eating guitar solo and a muffled recording of the band chattering sidle up against each other in the final quarter of “An Introduction”; moments later it’s kind of intense, the band finishing “Introduction” by wringing their instruments and the necks of background singers (their own necks, likely) for every last ounce of a stilted ascent. It’s kind of accessible, each one of these songs immediate and arresting for the nakedness of the production, the core simplicity, the unintentional cool—“unintentional” because every affectation sounds so damn natural, like Dirt Dress wouldn’t know how to sound different even if they tried; it’s also kind of esoteric, Noah’s creepy coaxes on “Go to Sleep” (“go to sleep, my little girl…what your momma don’t know / she can’t see”) dissolving into rounds of “Row, Row, Row Your Boat” (which no doubt inspired the interplay of the song’s guitar parts), “life is but a dream” in turn dissolving into the final untitled track’s sound FX nightmare—or more slyly conceptual structures, like on “Junk” where the chords and woodpecker percussion put their heads down to blur through Noah waking up and supposedly enjoying a nice day but then the instruments pause and become bright, excited, when Noah sees some trifle he begins bartering for. It should be noted, too, that the band’s sense of humor is as perfect as ever in this example, Noah’s petty haggling (“What is this? / What does this do? / How much is this? / I would like to pay less”) serving as the lyrics for what is essentially the song’s big chorus.

The association of all these semi-contradictions finds Dirt Dress mapping out an in-between that doesn’t sound at all like a “kind of.” They’re parsing that in-between as they solidify their own identity, growing more assured in the way they communicate tragicomic vagaries, giving sharpness and poise to an amorphous blob of post-Vonnegut thought—which is an assertion that only has meaning after you hear “Dreams” and the way Dirt Dress designate a lyrical parenthetical with a one-time musical flip or how they build to a mostly meaningless line (“These are desolate dreams / so I hang them / on my arm”) in a way that makes that line feel, like, profound. Here are shouted whispers of secrets no one understands anyways; the wry delivery makes us listen and in the listening we find ourselves enraptured. So, actually, this EP is not kind of great…it totally is. And Dirt Dress again establish that they are a band that’s difficult to peg even as their music begs the question, “Why are you trying to peg this?”