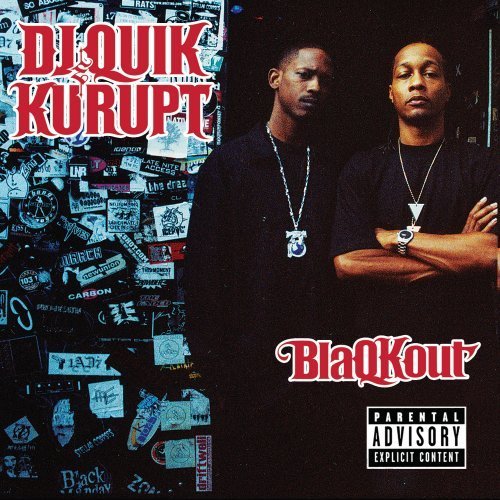 At its best, DJ Quik and Kurupt’s BlaQKout is a disarming and unexpected update of the West Coast sound made entirely and staggeringly relevant in a long post-Coast rap landscape. And by “at its best,” I pretty much mean “Do You Know”: melancholy sweeps of strings recall Primo’s august turns on Moment of Truth, while burbling bass lines and sliding cymbals keep the track rooted in the artists’ California history and phased vocal clips on the hook nod at post-Prefuse glitch-hop. This diaspora of influences is welded together with grace and a calm artistry; to their credit Quik and Kurupt refuse the overreach such sanguine production could’ve netted from less assured emcees, letting the beat breathe easy as just another smooth fuck-yeah on an album full of smooth fuck-yeahs. Two tracks later, the chorus of “Ohh!” does all of this again, fused differently and toward a different end, in about ten seconds. For the record, “Hey Playa!” is also absolute fire, 2009 model.

This is sorta strange, because DJ Quik’s an accomplished producer with no trademark besides high consistency, a sort of upterranean 9th Wonder who never sucks but also never transcends. He can fall into apish and anachronistic trend-hobbling here, as on the supremely irritating “Watcha Wan Do,” which I think is actually ripping off the 2001 hit “Get Ur Freak On,” and the totally serviceable g-funk of “Fuck Ya’ll” and the title track. As an emcee—at last, a producer that can rap and control the maestro!—Quik’s got a whiny Eazy-E cockiness that at its best gets a little Deltron freaky, as on the batshit stupid (in a good way) “Jupiter’s Critic and the Mind of Mars.”

All in all he’s in top form, meaning above-average, but it’s a little disappointing to see it all funneled into so many smooth fuck-yeahs, with “The Reggae Track” and “The P-Funk Track” tacked on late in the runtime as variation. In theory these unimpressive tendencies could be leavened by the sturdy mic presence of Kurupt, who despite his awful name and career is a big, countrywide talent, contemporary of both Beanie Sigel and 2Pac and possessing a lot of the hardknock charm of both. Instead, Kurupt’s verses feel like addendums to the uneven but intermittently brilliant production, pasted onto the unambitious track structures and themes. Of course, this is West Coast rap, the kingdom of lowered expectations: I should note that much of this critical foot-shuffling can, provided the right intoxicants, be rendered blissfully, boundingly moot.