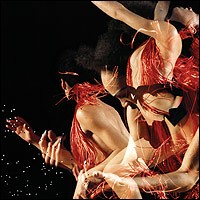 Theme for a Broken Soul

Alan Smithee made some really bad movies. Except Alan Smithee was many people, an identity with which sometimes famous, sometimes infamous filmmakers blanketed themselves with shame, unable to stand up and say, “Yes, I made this waste of celluloid, this horrible waste of your and my time.” Enter the Dragon Madlib, hip-hop cook extraordinaire, consistent and prolific, baking up disc after disc of steaming swing to grit its way out through speaker screens. Madlib, take a break, buddy.

The press release would never let on that, yeah, “DJ Rels” is simply another alias for Madlib to notch into his bleeding belt. Under this moniker, Mr. Madlib deigns to mix jazz, easy listening, bossanova, jungle, and techno into that perfect Folgers-in-your-cup background music. Why, a few minutes of the nine minute “Broken Soul/Dawn” even sound like a cheap synth rendition of a coffee machine dying. The setup here’s simple and obvious; Madlib’s found his Alan Smithee name. Hopefully, he’ll be kind enough to let other respected beat-smithies appropriate it for their own disappointing side projects, and then someday the whole “DJ Rels” mess can be retired with a chain, a boulder, and the sea.

The first two tracks on the DJ Rels’ tour de force, “Don’t U Know” and “Sunrise,” promise something mildly pleasant, like a peck on the cheek. “Don’t U Know” introduces the setting with its Casio bass and percussion hitting upon a spontaneous groove that then drips into something more decadent with a thick icing layer of keys and samples. “Sunrise” sounds more like sunset with cool purples and crimsons, languid treble stretching out over vibrating percussion, as the music always seems on the verge of settling into the black hush of a silent night. But it never quite gets there.

This lack of significant progression renders the incremental developments of each track unsatisfying, ultimately. DJ Rels plays around with stasis more than build, and it doesn’t have much of an effect because the individual sonic threads simply aren’t vibrant or of fine enough material to merit the attention of his staid twining. It’s the kind of able yet casual knit-work that most artists would just warm themselves with and not bother taking to market. One has to wonder if the post-Madvillainy Madlib demand was, by far, the determining factor in Stones Throw’s decision to sell Theme for a Broken Soul.

No better examples can be given for the artistic laxness at the heart of the DJ Rels ice machine than the interminable “Broken Soul/Dawn” and the plodding “Universal Peace,” whose seven minutes end up sounding like the same bumpy loop despite the obvious variations. These songs practically dare the listener to stay tuned; it would take pure plasma laser-sealed into the compact disc belly for any album to recover from such a slothful pair. Thankfully, the tracks do move back to the four and five minute marks, but the music still starves for more spice and seasoning. The hottest flavor comes with the warbling basso, Club Amazon drums, key note sustain, and toy dog barking of “Eclipse Pt. 1&2.” For the most part, everything that follows is orphans’ gruel – although the hand claps on “The Doo (Do It)” may give it the most bump of the lot, sadly enough.

The final track makes an ellipsis its title, and surely not much else could be such an accurate summation of DJ Rels’ Theme for a Broken Soul. Three identical dots that tantalizingly imply something compelling to come… but like an Alan Smithee, the man of talent forgets what he was going to say, he loses the plot, or maybe he never intended his current work to be speaking to a wide audience in the first place. To which the jaded listener may say: “Burn, Hollywood, burn.”