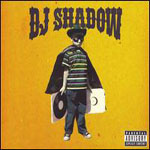 2. “This Time” -- This is the “real” introduction, and it’s a jazzy swinger that features a full-song vocal sample that seems like it was just waiting for Shadow to use on his “new, difficult” album: “Well I didn’t know, just couldn’t see / The memories and past failures, like a Shadow haunting me.” That’s a brilliant use of someone else’s words, and a nice comeback from the mock-seriousness and gravity of the Burt Reynolds introduction. The Voice continues: “There was a dream / wanted to come true / But dreams you know they need to be followed through.” Shadow is talking directly to us here, almost as a pre-emptive justification or apology for what’s to come. Which we deserve. 7/10

The Yay Area Sound doesn’t have an Ambassador with a household name just yet. E-40 was poised to break out (yet again) but his Warner record died in the ass. Shadow has made it known that The Outsider is at least four parts an attempt to bring some hard-earned props to the Bay and the Sick-Wid-It extended family. “3 Freaks,” the first single, was probably the album’s best shot at turning those locals into internationals. Too bad, then, that we get a rapper that sounds like Dig’Em the Sugar Smacks frog discussing a threesome. Sounds great in the club though, probably. 6/10

5. “Turf Dancing” feat. The Federation, Animaniaks -- The MC’s on this song yell about being lesbians trapped in mens’ bodies. I’d rather actually be at Yuk Yuk’s. The first guy totally ignores the beat, which makes me not care about his name. As Shadow does a decent job varying the arrangement, the mc’s change absolutely nothing to compliment him, and the end effect is akin to a Porshe on blocks. Shadow needs raps that can keep up with his ambition. These don’t. 3/10.

6. “Keep em Close” feat Nump -- Guy gets his house broken into over a beat that’s too slick for his teen-slim voice. “Keep Em Close” also loses points for the inquisitive cutesy of the ascending piano that winks whenever the chorus is repeated in the verse. But can it pat its head and rub its belly at the same time? This would have benefited much from Scarface. Or even Hayden. 2/10

7. “Seein Thangs” feat. David Banner -- Banner’s first verse about metanoia is complimented perfectly by his (last minute) second verse about Katrina’s unsupported aftermath, setting up a theory/example combo that few political songs can muster on purpose, never mind as an afterthought. If it weren’t for the “EH!’s” and synth-claps this would sound like a Sixtoo beat from 2001 remixed for sub-woofers. This weirdo actually works, especially when Shadow’s chimey keys trickle down over the chorus. Good music. 8/10

10. “Backstage Girl” feat. Phonte -- A seven-minute joke with “Myspace” as the punch-line. There should be more songs that do that, but not too many. The only other dude that can brag about groupies while lamenting humanity and not come off like a total douche is Slug, whose “Woman With the Tattooed Hands” probably cost 95% less to make, and is twice as good. But since we’re using a ten-point scale here: 7/10. I can listen to this the whole way through and enjoy most of it, if not only for its novelty value.

11. “Triplicate Something Happened” -- This is a three-part mood-maker, its centrepiece being a gorgeous, absolutely beautiful and misty lift of some finger-picked string instrument, with descending harmonies subtly hinting at traditional Japanese music. Apologies for the utter vagueness, I’m not buying this album just to read the full liner notes. This song sounds like the opening or ending of a lost Endtroducing record. Except the drums don’t come, so nothing happens, three times. 5/10

12. “The Tiger” feat. Christopher Karloff, Sergio Pizzorno -- Kasabian’s Pizzorno sings like an only-child mall-punker imitating Thom Yorke over vaguely “exotic” rhythms. No one likes this song. They are right. This would be a 1/10 if I didn’t have to deduct points for it being a continuation of that “movement” that sees American DJ’s go to Brazil or other countries with a Big Dollar imbalance, buy up 50 copies of some underprivileged family band’s home-recorded and pressed 45 for $100, bring them back to the US, sell them for $50 each on Ebay, and make double-cd mixtapes out of them and sell those on Ninja Tune for $20 each. “The Tiger” doesn’t smell right. 0/10.

14. “What Have I Done?” feat. Christina Carter -- Shadow has always used bites of strings and harps and various other pluckables to thicken his break-based compositions, and his timing is consistently impeccable, always bringing the drama without the dramatics. “What Have I Done?” is prosciutto-fisted, presuming it even has knuckles: it’s just harps and strings and plucking and some bowing and very little composition and all theatrics and no drama. And Carter’s breathy laments plop a dollop of dried meringue onto the “delicacy.” Yawn and you pulverise the whole thing (except the part where there’s a small company of men chanting “go, go, go” or “hut, hut, hut”). 0/10

15. “You Made It” featuring Chris James -- The only thing differentiating James from Martin is his name. This can’t be anything other than a look to getting that Nigel Godrich money. To Shadow’s credit, the musing guitars and soaring strings make a wondrous impression of wonderful wonder at purity and innocence and wonders of life in general that is bound to touch everyone exposed to it on AM radio after the Sunday broadcast of Mass. -2/10.

16. “Enuff” feat. Lateef the Truth Speaker, Q-Tip -- Do you remember “The Wreckoning,” on which Lateef used a quasi-biological treatise on the decomposition of human flesh as an analogy for the sinking feeling an MC gets when faced with the prospect of a battling him? If so, you will hate “Enuff.” A vaguely Spanish guitar gets chopped and pitched and has you waiting for a Santana solo and Wyclef/Will.I.Am ad-lib VD. Lateef’s upper-range rap voice is perfect for boring through your skull and scaring you shitless, which is exactly why Lateef’s upper-range rap voice is way too nerdy to start a song with anything like the words “HEY GIRL!!!” The last good thing Q-Tip did was get dissed by Phife for wearing see-through shirts, and that was back in 1999. This song ends with one-step pacing and digi-claps that Shakira worked three years ago. And this year. I’m ok with Tip being a disaster on anything after Midnight Marauders, it’s a fact of life. I just wish Lateef would use his incredible talent for incredible songs again; he’s capable of pulling off an amazing ragga-chat-rhyme-bounce like Mr. Lif does live, and the guy is so intense on stage that he gets new wrinkles after each show. Maybe he appears here on the advice of his dermatologist. Or, more likely, stylist. 1/10.

17. “Dat’s My Part” feat. E-40 -- Say what you want about E-40, the guy has been making interesting music and contributing to the English language for something like sixteen years now. Like a lot of his catalogue, this song has zero substance. Unlike a lot of his catalogue, this song also has zero catchiness. The only things it can really claim are 56 single instances of panting, the coin sound from Super Mario, and the line “Shoot you like Dick Cheney”, which is funny, but also has the wit quotient of a line like “Marry you a week after your son died mysteriously and also a week after you gave birth to my baby, like Anna Nicole Smith’s lawyer”. Shadow’s manic blips and deep, whirring synths actually match up with 40’s scattershot, and thus beat the hell out of the other “Bay Area Sound” songs on The Outsider. 5/10

Like many publications, we’ll round that up, this being a DJ Shadow record and all.