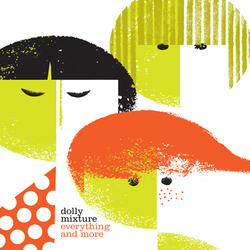 Everything and More Box

Every so often a long-lost pop record will resurface and sound like a missing link in the genre’s emergence. Demonstration Tapes, Dolly Mixture’s one and only album, reissued as part of the Everything and More boxset, is one of these. Over the course of Dolly Mixture’s six year run, they formed to play a friend’s party in 1978, found support from John Peel and Paul Weller, played shows with the Fall, at one point was opened for by a then-fledgling U2, and broke up in 1984. Somewhere along the way they wrote a whole lot of songs that seem to be as relevant to the formation of indie pop as K Records’ early output. There are traces of these songs in movements that followed like C86 and riot grrl and, more recently, in bands like Los Campesinos! and Comet Gain. Their songs rewrote girl group music in the wake of post-punk, imbued it with a sense of amateurishness, and made it something that, at the time, was uniquely theirs, and even now sounds quite striking.

The first thing that jumps out is still Debsey Wykes’ voice, which set Dolly Mixture apart from both post-punk singers and girl groups by sitting uncomfortably between the two. Wykes doesn’t snarl and she’s often ever so slightly off-pitch; while this would be a bad thing, it starts out a curiosity and by the end of its run becomes one of its strongest assets, becoming increasingly proficient and functional as the rest of the band does. Second, Demonstration Tapes captures the band’s progression in roughly chronological order, which makes something quite special happen: one can hear, in about seventy minutes, three friends transform from Undertones fans to indie pop progenitors suddenly writing their own narrative and delivering melodic gut-punches.

Demonstration Tapes‘ first songs manage to establish Dolly Mixture’s sound, but hint at greatness more than they achieve it. The band has jangling guitars, bursts of energy, and Hester Smith’s rough drum fills, and occasional moments in which they transcend their trappings—like in “The Didn’t Song,” where xylophones break the monotony of their guitar work, or “Will He Kiss Me Tonight,” where the band’s amateurishness somehow disappears completely. As their songs get longer, they get more ambitious. “Shonay Shonay” opens boldly with Wykes singing a cappella, then moves through tempo changes and a multi-part structure. Of these early songs, however, “Side Street Walker” is melodically the best, and the confidence in Wykes’ voice as she gets to its chorus marks a transformative point in the album’s arc.

From this point on, the band starts to break from its standard approach to guitar/bass/drums, and yields increasing results every time. “Understanding” subdues Rachel Bor’s guitar, but also gives weight to every chord change. “Wave Away” then brings every element together in something outright stunning. Wykes’ vocal melody is gorgeous, whatever elements of new wave exist in their sound vanish amongst the clatter of poorly-recorded crash cymbals, and the guitar finally plays completely to their strengths. And then something similar happens again on “Remember This” and the piano/string exercise “Whistling in the Dark,” which is melodically and structurally almost perfect, a case for pop canonization in and of itself.

The Everything and More set, true to its name, includes two additional discs, one of demos and live material and one of the band’s singles, though neither are quite as essential as the massive album that they surround. The singles only sound marginally better produced than the band’s demos, and a few of the songs are certainly worth having around, though several are repeated on the album. The late-period demos collected on the And More disc, however, do see their basic sound getting increasingly sophisticated, and it’s hard not to want more like it, which unfortunately doesn’t exist. What does, however, is a collection that’s a more than adequate summary of Dolly Mixture’s existence, and proof that the trio, perhaps unintentionally, stumbled upon something great.