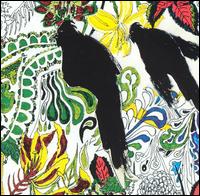 Innovation in music is a strange thing. Many musicians try to make that one small step in their craft, hoping for a giant heap of adoration and critical praise. What constitutes innovation is often a bone of contention amongst the "Enlightened Critics," but one thing everyone can agree on is that it doesn't come easily. Sometimes that one small step can be inadvertent. And in the case of The Double, necessity (and maybe a bit of luck) has truly been the mother of invention.

Legend has it that when the Double went into the studio to record their debut album way back in that hazy, fateful summer of 2002, drummer and founding band-member Jeff McLeod's hand was hurt in a bad way (that is to say, it was broken). Rather than delay recording or enlist a session drummer, the one-time math-rock band inexplicably pressed on and recorded their songs sans skins. In the place of the standard issue rock and roll drum kit? Impressively blissed-out, sun-kissed and alternately percussive keyboards along side whirling, looping synths fill any void the lack of traditional drumming left. To achieve this sound, the band improvised and basically re-wrote their songs in the studio. Supposed 'mistakes' were left in the songs and developed as they went. Songs were allowed to grow a la Brian Eno or Kid A. Keyboard and guitar riffs crescendo and wash away at a moment's notice in a vaguely melancholy and pyschedelic haze, building and collapsing what would otherwise be simply well-written indie-rock. In fact, some of the more interesting moments of the songs are the very voids here one can only imagine the drummer would be, um, drumming.

The result is a New York band that sounds completely out of time and place amongst the current crop of Gang of Four/Wire/Joy Division/Echo and the Bunnymen worshippers. The Double seem more indebted to the early work of Smog and Iran with the added aforementioned keyboard and synth flourishes. The similarity to Smog comes to the fore when the Double's other original member and guitarist, David Greenhill, is on the mic. His scraggly pseudo-baritone is a welcome and calming anchor to the swirling rhythms jabbing around him. Jeff McLeod, who occasionally takes the lead as on "Soul Cougar," has more of a Thom York-ish delivery that's nice but doesn't work as well to my ears. Fortunately, the mic is usually in Greenhill's possession and he leads the Double with his eerie delivery that seems at once both laid-back and anxious.

The songs on Palm Fronds are driven by Greenhill's delivery and wonderfully destroyed by keyboard explosions or fuzzed out guitar half-riffs. The album opens with a pounding keyboard riff on "Blanket at the Beach." The song slowly builds into a slow keyboard haze that's broken by a surprisingly melodic and jangly guitar. This song leads nicely into the schizophrenic "A Throw of a Distance" one of the highlights of the album. Greenhill's vocals are buried beneath a sheen of keyboards that somehow retain their melody despite sounding huge. The song illustrates the Double's strange melodic drone that's pleasantly crushing, but never what you would call loud (sort of like a lo-fi My Bloody Valentine? Maybe). It's a strange and welcome sound. The album is a consistent affair with other highlights coming on "Ghost Song" and "Miami."

The Double's finest moment comes at the very end of Palm Fronds. "Black Diamond" is an epic, glitchy keyboard masterpiece that has to be one of the songs of the year. Even you ignore the rest of the album, listen to this song. It begins with Greenhill intoning over a lightly piercing keyboard riff. A synth loop slowly chugs its way to the surface, where it stutters alternately through left then right speaker as the shimmering keyboards weave in and out. The loop flits off into the sky as the guitar skwelches out in a lingering hiss of feedback.

As a music fan who's seen a lot of people pick up the Interpol or Strokes formula and run with it (and not very far), The Double is a welcome sea change. Palm Fronds is a hypnotic wash of feedback drenched guitars, keyboards and looped synth percussion that is for my money one of the finest releases of early 2004. Sometimes one small step is all it takes. Here's hoping the Double can continue to make them.