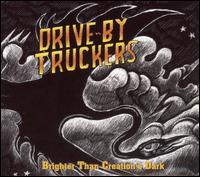 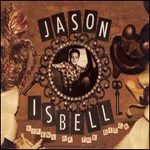 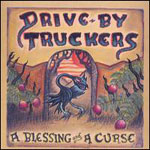 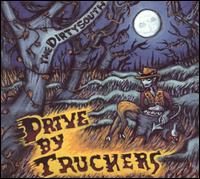 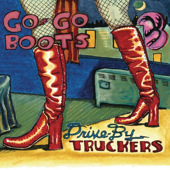 Drive By-Truckers were recently (dismissively?) referred to by local rag Time Out New York as “wildly popular.” Methinks that Patterson Hood and Mike Cooley might somehow scoff at this notion. Granted, they nearly sold out New York’s 3,000 cap. Terminal 5 this past New Year’s Eve, something that would have been unthinkable, say, seven years ago. But they also played New York on at least five separate occasions in 2010 alone, and just released their seventh studio album in the past ten years. “Popularity” sure as hell hasn’t done much to quell their relentless, borderline unhealthy work ethic.

And now Go-Go Boots has just been released a mere eleven months after The Big To-Do (2010), a rapid turnaround even by this band’s über-prolific standards. This is primarily because the two records sprang from a single recording session, and were designed as companion pieces: To-Do was purposely posited as the guns blazing, three-guitar rock album, and Go-Go Boots the quieter, less immediate, with a pointed back porch vibe and focus on acoustic piano and slide guitar flourishes. Patterson Hood calls it the band’s “Southern Soul” record, as well as a tribute to the late Eddie Hinton, an unheralded Muscle Shoals musician who penned two of the songs here. I’d call it the closest they’ve come to capturing the wistful pop spirit of early ’90s Tom Petty, save for the fact that ole Tom would probably be less than eager to include a song about a small town minister murdering his wife, let alone two songs.

But Patterson Hood is a consummate storyteller who loves himself some Southern gothic. As such, Go-Go Boots rewards us with both the title track and “The Fireplace Poker,” a pair of six minute-plus songs in which agents of God murder their significant others, the exact inverse of the preacher’s wife pushed over the edge on The Big To-Do’s “The Wig He Made Her Wear.” The protagonist of “Go-Go Boots” seemingly gets away with the deed because he “was a pillar / and his alibi was sturdy,” but Hood makes sure to leave things open to interpretation, and the small town gossip leaves the preacher’s son wary, especially when “Daddy’s new wife drives around in a Lincoln”—this after Mom was confined to an Oldsmobile. The quieter instrumentation has the effect of placing Hood’s vocals high in the mix, and minus _To-Do_’s jet engine guitars, his lyrics are easier to discern than on most Truckers joints. He’s incredibly on point throughout, whether detailing the PTSD horrors of a Vietnam vet (“Ray’s Automatic Weapon”), following the travails of a disgraced police officer (“Used to Be a Cop”), or even laying down a breezy tribute to his grandmother on opening road trip track “I Do Believe.” Ten years after Southern Rock Opera (2001), nobody represents the odder nooks and crannies of the Mythic South like Patterson Hood; the man could pen some incredible episodes of Justified should he ever opt for a Truckers break.

As for erstwhile consigliere Mike Cooley, he’s only allotted three songs out of _Boots_’s fourteen, the same amount he was granted on The Big To-Do, leading one to believe that he simply may not have had much to contribute at the given recording session. His share here is made of all acoustic finger-pickers, and his hang-dog demeanor is always a welcome change of pace from the comparatively gruff Hood, especially on the chuckling Warren Zevon-isms of “Cartoon Gold” (“I think about you when I can / And sometimes when I don’t I probably should”).

It’s this relative lack of Cooley (and Tanya Tucker-sounding bassist Shonna Tucker, who gets to sing two) that keeps Go-Go Boots from reaching the post-Jason Isbell high-water mark set by 2008’s Brighter Than Creation’s Dark (“Three Dimes Down”: wow), though it feels like far less of a placeholder than The Big To-Do, and a more dynamic listen. Like every Truckers album, there’re at least two songs in the home stretch that could’ve stood to be cut, and from a purely sonic standpoint, there’s little to distinguish Go-Go Boots from the eight studio albums that preceded it. But the Drive-By Truckers remain a distinctly American band, a band whose stories are on equal footing with the music beneath. While I know I won’t tire of Patterson Hood’s tales anytime soon, maybe the East Coast has finally caught up.