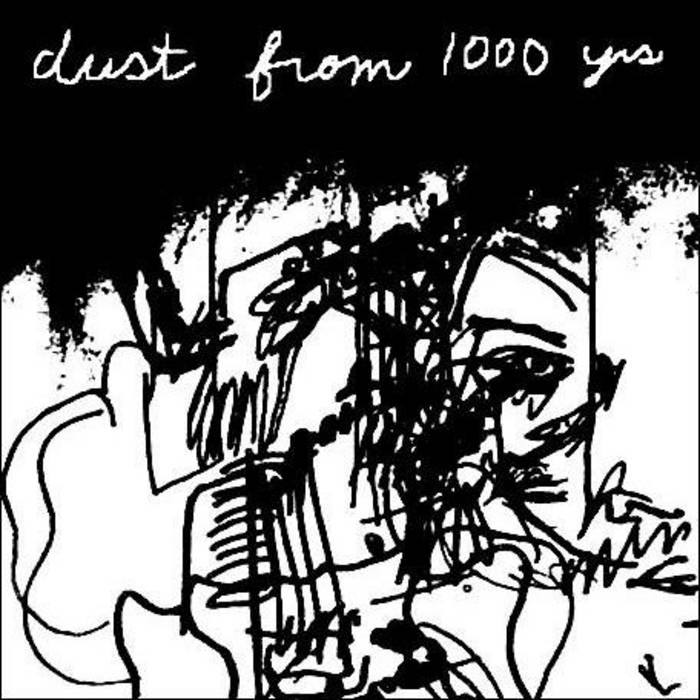 The Cokemachineglow review of Dust From 1000 Years,
Or: How Emperor X can tell you everything you need to know about modern music

CMG/Peter Hepburn: What have you been listening to out on the road?

Emperor X/Chad Matheny: There’s this awesome band from Bloomington, Indiana called Dust from 1000 Years, and we’ve listened to that tape at least four times. There’s a lot of good music being made today that no one’s ever going to hear, which is kinda sad and kinda exciting.

Immediately following Part One of this review, and still somewhat prior to Part Two and the discussion of the actual merits of Dust From 1000 Years, lies the realization that Chad Matheny is just as right about his assertion in the second half of his response as he is about the band.

Think about how many guitars are sold each year. Not the nice, high-end Fenders with pick-ups that make everything sound oh-so-right, but shitty acoustic guitars or intro-level Squier Strats with the 15-watt amp included. Straight from Guitar Center into your garage, dorm room or local open mic. Sure, most of these will hang in musical limbo, not doing anything at all or, at worse, being used to perpetrate some off-key cover of “Blackbird” to impress the girl down the hall. But given the statistical probability of a guitar ending up in the hands of someone with some artistic capabilities, we are almost assured of a constant supply of new/creative music.

Now, it’d be nice to think that the combined force of file sharing, chat rooms and the internet music press would unearth most of the good stuff out there. It just doesn’t, though, and it can’t. Our collective conscience can’t sort through and deal with the thousands of itty-bitty bands that have that something that, if encouraged, could really lead to great music being made. I live in Washington, and I can’t even give you my thoughts on more than half a dozen (currently operating) D.C. bands. How am I supposed to know that there are awesome bands in Bloomington, IN? How did Chad Matheny even ever manage to get critical praise and attention? He merits it, but there’s clearly a gap between deserving and receiving in this regard. I’m always happy to find under-the-radar stuff like David Thomas Broughton, Tiger Bear Wolf, or Dust From 1000 Years, but it comes with the knowledge that for every one of these bands, there are ten others that I’ll never hear about.

So here’s the deal: Chances are you are never going to hear anything more from Dust From 1000 Years than the three tracks we have linked for you over there on the left. Yeah, you could go to their website and buy their CD (they were only charging $3 last time I checked, which makes Dischord look sort of greedy), or you could have them come and play at your house on the never-ending tour they have just begun, which probably won’t happen. So if you get nothing more out of this, then just remember Chad Matheny’s second sentence and go out and support small local bands making good music.

Dust From 1000 Years/Michael Hodges: We didn’t go into this with the idea we were going to make a lo-fi album. It just ended up that way. We used the highest quality most easily accessible recording device. We didn’t take our time with it at all. It was super rushed and pretty sloppy. We discussed the sloppy aspect and most were fine with this. Matt and David just joined the band a week before we recorded so most of their parts aren’t solid. They had to wing it. It was recorded on an 8 track, and we definitely could have done a way better job, but we’re all really lazy. We’re also very poor. We really have no expectations with our music, so production quality doesn’t really enter into our minds that much. We do what we can with what we have.”

So this is what happens when folk music gets to 1989. Or maybe not. Maybe this isn’t folk music at all. Maybe under the lightly picked guitars, matching keyboard melodies, occasional organ flare, Midwestern gothic lyrics and layers of tape hiss, this is just plain old-fashioned indie rock. Kinda ugly looking, certainly not that well thought out, and definitely not what is to be expected these days. This is the time of Wolf Parade, the Arcade Fire, and Clap Your Hands Say Yeah. These are bands that aim for the grandiose and, to varying degrees, capture it. It’s been happening for years now in the bombastic rock of The Wrens, the group-based catharsis of Broken Social Scene, or even in Sleater-Kinney’s increasingly arena-sounding rock. Compared to these bands, Dust From 1000 Years sounds like a band singing into its own chest, the sort of group where the lead singer isn’t very good at making eye contact and seems warped in the more bad than fashionable way. Remember when Isaac Brock was still considered something of a threat to society? Yeah, it’s like that, except Michael Hodges isn’t going to make things that easy for you.

So, even if it’s not folk music, it’s certainly 1989 in terms of the lo-fi tradition the album follows in. Another thing Chad Matheny talked to me about was how lo-fi is, at this point, little more than a production choice. Given the state of digital recording and editing technology, the means are readily available to make your music sound as good as you want it to. In the case of Dust From 1000 Years, it just seems like it doesn’t matter. It’d be nice to hear these songs without that insistent layer of tape hiss, but in some ways it suits the album well.

Like Hodges said, the record was thrown together quickly, and it has that feel. The songs are here, and in many cases, especially on the first half, reasonably well-formed. It’s on the second half that things seem like they are just barely holding together.

“Secrets” starts the album off under strict control, letting the organ rise up in the final verse only to head into the minor key dirge of “Evil Ways.” “Creeks” is the best of it, when the band seems to coalesce behind Hodges’ wail of “I know these creeks / I know they’ll carry me / all the way to eastern Tennessee.” There’s nothing particularly upbeat about anything on the album, and some of the songs toe the line of emo cliché, but when they break away from that, they can match the downbeat sadness of their compositions quite well.

It’s when they let it devolve that you can see the heart, and the natural progress of the album becomes evident. Cords begin to fray with the barely audible lyrics of “Come Back to the Soil,” and then halfway through “Started a Fight” the guitar front just opens up, leaving Hodges wailing over a beautifully violent, unexpected guitar solo and its accompanying wall of feedback. The subdued “Ghost” plays perfectly into the haunting apocalypse of a closer, “Drifting into the Void,” an unstable song that the band manages to pull off only for their determination and love of the music, and one which ends with the terribly appropriate, “I might be crazy, but I’m not dumb / And broken equipment will never let you down.”

Don’t worry about Dust From 1000 Years making your stereo system sadly irrelevant; you have your Radiohead albums. Don’t worry if the first time through it doesn’t much jump out at you; this album is a strong grower. Don’t worry that you’ve never heard of this band before and most likely won’t be reading about them on Pitchfork or Stylus any time soon; give some new music a shot. You never know where the next Pavement or Elliott Smith might be hiding out.