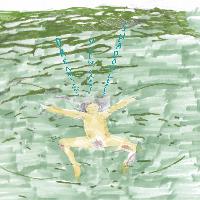 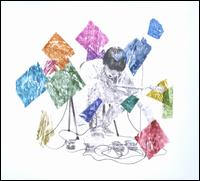 Like Oval’s stubborn and occasionally beautiful behemoth O, Duston Wong’s Infinite Love is an album of self-pastiche. A tortured guitar repeats lines via delay and loops, and minuscule differences are allowed to speak the volumes generally uttered by dramatic key changes, dynamic shifts, and the lyrically explicit. And then these echoes of water-boarded instruments are drawn and quartered, jumbled and reconfigured, spliced and diced. As far as methodology goes, one is reminded of Burroughs taking scissors to a manuscript, reordering sentences until they revealed, like runic truths, some chance meaning. The sense is that this language is one with which it’s difficult to sustain compatibility—a language for which compatibility is, in fact, tantamount to death. Little surprise, perhaps, that both Oval and Wong call Thrill Jockey, that great sanctuary for the experimental, their home.

Wong once played in Ponytail, but his angular guitar work from that band is here operated on, removed and isolated, scrutinized. It’s the artist surrounded by pedals and loopers, the sound beyond even his control, almost incidental. Like Oval’s recent work, what moments of melody and drive seem stumbled upon, as if serendipitously, and are too soon gone. These songs don’t establish themselves and develop the way we’re used to songs doing. They are the curious mutations of a talented guitar player’s dabbling.

I wrote of Oval that, “It’s the project itself, uninterested in themes or movements or dynamics but rather in asking why we require those things, which mitigates one’s ability to enjoy it.” The same holds true here, in a sense, though I don’t detect the same explicit anti-formulism at play. When a particularly sensuous confluence of notes occurs, it doesn’t necessarily follow that they will be consciously preempted in the same way. In fact, the album does hint at structure (and experimentalism’s place within it)—the album’s two discs, titled “Brother” and “Sister,” begin and end the same way, but follow their own paths between. The notion here is that Infinite Love is less a one-off than an examination of similarity and difference: these two discs could very well have been two others discs, or fifty thousand discs. Wong is wordlessly speaking to improvisation and redundancy, the act of making music, of creating “songs,” in an age of digital play and under the capricious sway of one’s creative process. There are differences between the discs, but to unpack those differences, or to analyze those differences as one would an artist’s choices, seems to me to be missing the point. In other words, where with Oval’s O I felt that Markus Popp was simply undermining and unraveling the listener’s expectations, with Wong’s Infinite Love I feel there is a more nuanced statement being developed about how one’s expectations can be surprised.

As is usually the nature of projects that lend themselves to discussions about structure and preference, you get out of Infinite Love approximately what you put in. And though there’s a broad enough spectrum of sounds to keep one interested in the album’s aesthetic for a short period, unless one is willing to extrapolate from complex sounds and meaningless noodling a discussion about complexity and the mechanics of meaning, Infinite Love is a prickly, antiseptic listen. Surprising and interesting, to be sure, but hostile to expectations and ultimately as unsentimental about itself as it would be of any cultural artifact.