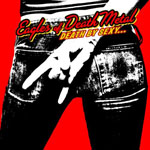 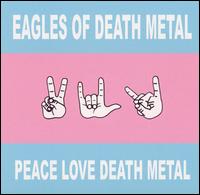 Many of the albums that we review here at CMG, and quite a lot of the albums in general release, are quite serious. Probably far too serious for their own good, but that’s part of the pretension of indie rock. Pretty much everything that Radiohead has ever released, for example, or the entire post-rock genre, is music that should be taken seriously and regarded as “art” (or some bullshit along those lines). Peace Love Death Metal falls firmly in another camp—the dirty pleasure.

There’s a whole bunch of albums out there that are just far too much fun and far too little substance. Eagles of Death Metal fall firmly into the same camp as Electric 6, Junior Senior, mainstream rap, and any number of one-hit wonders. This is to say that this could well become the soundtrack to the summer of 2004.

There’s nothing death metal about the Eagles; they mostly just aspire to the goofiness of '70s rock swagger. The whole record has an off the cuff feel (missteps, false beginnings, dialogue between the band members) that adds to the fun. Drummer Carlos Von Sexron (an alias of Josh Homme, who debuted the band on his Desert Sessions Vol. 3-4) teams up with singer/guitarist Jesse Hughes along with a few other contributors throughout the album.

There’s really nothing to analyze when an album has a song called “Whorehoppin’ (Shit, Goddamn)” and basically all the songs sound the same. Heavy, drilling guitars rock throughout the album over deep, rock drums, and Homme pulls together all the elements and throws in plenty of classic rock hooks. Hughes sings in a high-pitched voice which he occasionally drops in favor of an Elvis swagger, and both work well with the music.

“I Only Want You” starts the album off strong, and the guitar feedback of “Speaking in Tongues” is a nice production touch. “So Easy,” the renamed cover of “Stuck in the Middle with You,” and the quick “Miss Alissa” all serve as fun tracks, and chances are if you like any of the above tracks you’re going to like all of Peace Love Death Metal. And why not, really? There’re plenty of dark, dull months in which one should take music seriously, delve deep into the meanings and themes of albums, and talk of artistic vision. May, June, July, and August are not those months, and the Eagles of Death Metal clearly know this. Summer is a good time for a fun, breezy album, and Peace Love Death Metal fits the bill.