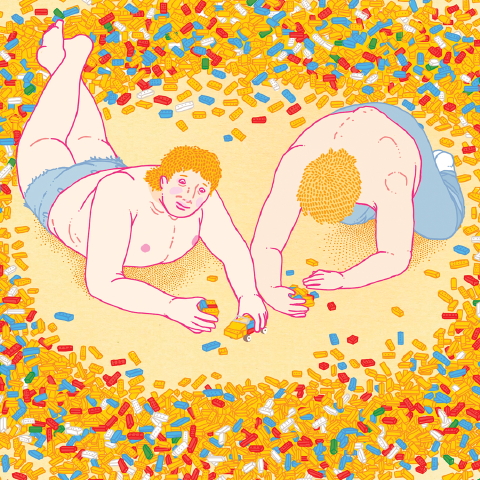 A mashup-making friend of mine recently explained part of his compositional philosophy to me: humor is legitimate, but “music should never have air quotes.” Personally, I take this to mean that irony used as a protective shield is a bullshit tactic for any act that wants to be taken seriously (and any act that expects to be paid for making and performing music wants to be taken seriously on some level). CMG’s very own Best New Artist™ Calum Marsh summed up the issue in his recent takedown of MSTRKRFT—stripped away of the layers of artificial cool, this kind of music, tailor-made to be conceptually unfuckwithable lest party-pooping take hold, is empty at its core.

Before anyone jumps down my throat, Super Animal Brothers III, the latest record from Ear Pwr, is a good deal more enjoyable than MSTRKRFT. Devin Booze, the instrumental male half of the duo (sidenote: does it always have to be that way? See: Siciliano, Dani — “Be My Producer”), is good at laying down a groove that’s danceable but also has a foot in the homebrew/circuit-bending mindset. Booze is clearly fascinated by synthesis, which results in a cascade of fattened, distorted analog arpeggios assaulting these tracks. It’s an admirable energy. Sarah Reynolds, the other half, isn’t flooring as a singer, but she works well as a peppy dance diva with an edge.

So, where’s the issue? Let’s start with those lyrics and track titles. Track eight is a great little jam, but it also bears the unfortunate title “Boys II Volcanoes.” Other lyrical topics include sparkly sweaters (on “Sparkley Sweater” [sic]) and manatees (“Discover Your Colors”). The net effect here is that Super Animal Brothers III is the stem of a great dance record with some irony smeared on it, shit-on-canvass style. Sure, it ends up making a statement, but…why? Thanks to Carpark star/insufferable manchild Dan Deacon, Lunchable-core (I’m coining that term now) is the cool Baltimore thing. If Booze and Reynolds didn’t have a press photo showing them decked out in neon clothing, complete with Booze’s MC Hammer-quote shirt, they might have to be marketed based on their actual music. Instead, they’ve delivered a perfectly packaged product for Vice readers with a two-week memory for blog sensation tracks.

It’s hard to believe that this kind of presentation (and it’s exactly that, not an aesthetic but a form of packaging) comes from an original burning desire of Booze and Reynolds to turn potentially interesting music into LOLcats. It’s the current MO for Carpark, and given that it’s annoying when Deacon does it, it’s only refried frustration when Ear Pwr do it. It’s one thing to say that childlike whimsy is an influence on the music you make; it’s another thing entirely to be the umpteenth act from the same scene to be pushing this hideous mustache-ready day-glo overload. Yes, cats are everywhere these days, but doesn’t that just make it even more of an eye roll to write a song about them using 4chan grammar (“Cats Is People Too”)? Just look how hard they’re trying in this performance. Witness how Reynolds and Booze shout “Rock n roll / Rocky road / Rocky III / Rocky IV,” complete with a random guy in hot pants and a megaphone.

Once again, it’s not all bad; some of these tracks are more than passable on their own. “Epic Suitcase” is, in fact, quite epic, a mess of sampled horn hits and synth-tweaking squelch noise. It’s also one of the better tracks on the album because Reynolds isn’t around to start singing about mega-super-awesome-puffy-paint-cereal-midnight-snack-disco balls. Then, however, we’re treated to “Secret Stars,” another potential vista that instead becomes a forum for Reynolds to command listeners to “drink that glitter.” Do these people really not have any honest friends around to look up from the Technicolor, Raekwon-sized coke mound and say, “Guys—guys! Put on some pants. Get a haircut you might not have to explain.” In the meantime, as I attempt to decipher an aim behind all this fake nostalgia and gaudy sheen, behind all this potential, I’m still mostly left with some too-tight pants and a pizza party. Oh, Ear Pwr, you both have it in you to be so much more than Carpark’s Tay Zonday.