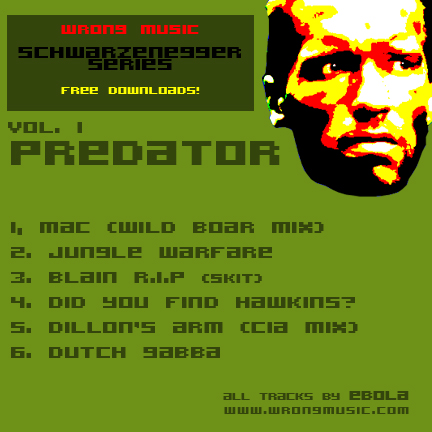 Maybe the words ebola and predator are in more search strings than common these days (thank you, swine flu), but a Googlewhack I can’t quite remember made me chance upon this reissue from Ebola. Originally part of the Schwarzenegger Series on Shitmat’s netlabel Net Lab, the Predator EP marked Ben Hudson’s first attempt to filter Hollywood through a minefield of grime. You’ve all seen the RoboCop Rap, right? Like that, but gone kablooey. It was a sampling/piracy technique that produced an instant/disposable concept album, with the six parts of Predator marking a first-time high before Chris Moss Acid took things dancey with Commando (2006).

So it’s lovely to be reminded that today, Ebola’s pilot masterstroke is still the guilty pleasure it was three years previous. His breakcore/grime/soundtrack hybrid might not be as gunky as, say, Predator 2 (1990), but it certainly matches that sequel’s appetite for boisterous big city destruction. Consider “Blain (R.I.P.)”: a straight lift from the film, but as Jesse “The Body” Ventura gets his lungs blown out by a ghost (no wonder he never ran for mayor again), you can see how dialogue this beefy needs little work to leap out and grab you. However, when amplified through Ebola’s evil shenanigans, it’s like flooding your brain with runaway crack and sliding knitting needles into your ears. Knitting needles on pistons in the case of “Jungle Warfare,” which takes the moment the alien first lifts its visor and blasts it with a sine wave of drill. By the time your ears recover from the shock and downright slaughter, you’ll feel like Arnie’s dropped a tree-trunk on you too.

Young though he may be, Ebola doesn’t have to rely on pure histrionics to light up the points of his project. All too often, the raw heatvision sfx and clips of the Predator’s plasma-caster need minimal tweaking to sound musical (sound is like the eighth soldier in the film; who can forget Bill Duke’s last charge while whimpering lyrics to “Long Tall Sally”). Sometimes, all that’s required is a little dicing of the screenplay page sequence and some wizardry worked with the layering: on “Dillon’s Arm (CIA Mix),” one of Hollywood’s most iconic arm-wrestles gets fed through a tube of distortion, a dubstep whiplash keeping time while the Predator rids the 2IC of his sidearm (the right side). However, in keeping with the gratuitous testosterone of the film, for me the more memorable moments are the ones of pure, steroid-shooting mayhem: an inescapable hard house loop as the unit slice up Columbians on “Did You Find Hawkins?” and the grand finale of “Dutch Gabba”; a three-minute deathtrap in waiting. Here, the crushed extra-terrestrial commits seppuku via a nuke, and just as the atoms split and Arnie ducks behind a rock (and survives!), Hudson unfurls a spool of techno so angry it could wipe out the remnants. As you flash through knot after knot of percussion, you’ll start to think the creature got off lightly.

Predator may have benefited from a less orthodox choice of source quotations (with so many zingers in the script, even the non-snarls are worth trying to memorize), but at only eighteen minutes you’ll struggle not to love at least some of Hudson’s vision. His orchestral grime and programming attacks fairly burst with his love for the film—they truly don’t make ‘em like this any more—so if you’re more of a Katherine Heigl kind of guy, I’d advise you to steer well clear. If you’re just wary of the harder electronic spectrum in general, I’d say this: associative familiarity can be a strange hook. And if you’re part of that lucky last third who believe that the balls-to-the-wall action of your non-commercial downloads should match the oomph of Hollywood’s finest, then you might want to make time for this piece of the ’80s that takes the meaning of “jungle” and inverts it. You really should. Even if you ain’t got time to bleed.