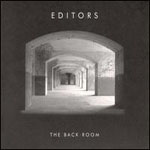 Let’s get this much straight: there isn’t so much as a split second of ingenuity or imagination in the entirety of The Back Room, the debut album from Birmingham’s Editors. Throughout its 43 minutes, the band happily rapes the canons of Joy Division, Echo and the Bunnymen, and (above all else) Interpol with little shame, often with results that are barely discernable from the work of their forebears. It’s the kind of thing you’ve probably heard done countless times before by more talented musicians, with more lasting and meaningful results.

That said, The Back Room is an agreeable, sturdy, and surprisingly re-playable debut, one which should probably keep any brooding college kid who’s worn out his copy of Antics happy for the coming autumn. The band seems keenly aware of their own redundancy and irrelevance; and, instead of trying to side-step it with occasional half-baked experimental diversions (as most bands in their position seem to do), they win you over the old-fashioned way: crafty songs, solid musicianship, and hooks that quietly nestle their way into your cerebral cortex.

It opens with the brief but rousing “Lights,” establishing Tom Smith’s deadpan Paul Banks impersonation, the band’s ear for a good chorus, and (again, much like Interpol) Smith’s often gruesomely bad lyrics (“if fortune favours the brave / I am as poor as they come”--which is something Bernard Sumner might come up with if he wrote bumper stickers for a living). “Munich” is another highlight, with a ridiculously danceable backbeat reminiscent of (or, more accurately, Xeroxed from) Interpol’s “Evil,” and a subtle but instantly memorable chorus. Best of all, perhaps, is the three-minute “Bullets,” with Smith singing “you don’t need this disease” like a mantra over a wall of screeching guitars.

Best of all are the longer, slower numbers. “Camera,” “Fall,” and “Open Your Arms” are all five minute-plus anthems with a tangible sense of melancholy and excellent, well-crafted climaxes. Sure, they all use Interpol songs like “The New” and “A Time to be So Small” as obvious blueprints, but Editors sing and play these tunes with enough conviction that it hardly makes a difference.

Which is exactly the band’s strength – much like Hal aped classic So-Cal pop just gleefully enough to make you forgive it’s brazen thievery, Editors succeed with well-written, carefully-produced, and slyly memorable post-punk that succeeds by sheer force of will. If you thought Interpol was pastiche, good god will you ever hate this. But if all you’re looking for is a solid goth-rock album to keep you nice and gloomy during the fall months, look no further.