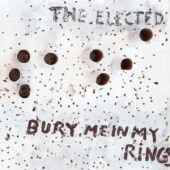 Bury Me in My Rings

“You loved too hard / You blew out your heart.” So goes the opening line to (the uncannily Elliott Smith-like) “See the Light” from singer-songwriter Blake Sennett’s new album as the Elected, Bury Me in My Rings. After all, love is a topic from which Sennett never strays far, and his song’s protagonists are typically overflowing with it, idealizing it, and flailing when it all goes sour. This starry-eyed approach has resulted in music that is everything but cool and aloof; we’re talking about a man whose last album featured the un-ironically titled “Beautiful Rainbow.”

It’s fitting then that with each album Sennett’s sound becomes increasingly rooted in ’70s and ’80s soft rock, an explicitly un-cool genre if ever there was one. With a good deal of Bee Gees era disco thrown in, Bury Me in My Rings makes for something of an oddball, goofy departure from the more serious indie-boy folk of previous Elected efforts. Sennett seems to be doing exactly what he wants, and it shows, even if at times Bury Me in My Rings loves a little too hard.

It’s been five years since the Elected released Sun, Sun, Sun, and after the breakup of Rilo Kiley and the Lewis/Sennett split that preceded it, Sennett decided to take an indefinite hiatus from the music business, moving instead into screenwriting and dating Winona Ryder. But since it’s a cosmic rock ’n’ roll truth that any skinny-armed troubadour loved and left by Ryder must once again pick up his six-string and document the experience, here we have Bury Me in My Rings, which Sennett recorded mostly solo but with some friends along for the ride—like, hey, there’s longtime Elected guitarist Mike Bloom and Bright Eyes’ Mike Mogis. Sennett’s personal life is shamelessly alive within the lyrics: “Jailbird” could work alongside Ryan Adams’s Gold (2001) at a Winona-themed party and “Go for the Throat” offers plenty of fuel for all those Jenny Lewis-haters out there.

Bury Me in My Rings is roughly half absurdly catchy disco-shimmies and half syrupy-soft love( and hook-filled track allowing Sennett a chance to take up Prince on the chorus. Sennett’s danceable songs temper the record’s melodramatic side with a healthy dose of bitchiness, particularly “Go for the Throat,” the aforementioned kiss-off that bounces along unrelentingly, issuing a series of takedowns such as “You think you’re so cool / You think you’re so fine / You’ve got the ‘go for the throat’ mind.” But Sennett can never be too cruel for long—“I know that somewhere,” he muses at the end, “You’re still filled with that light.”

And that’s basically of the problem with Bury Me in My Rings: Sennett could make an awesome record of fuck-off disco songs, but he just doesn’t have it in him. So instead he does what he’s most comfortable with, namely ooey-gooey ballads about unrequited love, thwarted love, indignant love, and love that just tries too damn hard to get noticed. The opener “I Was Born to Love You” says it all: Sennett’s protagonist is the kind of guy who says, “I love you” after about a week and is always scarily showing up on your doorstep. So then you dump him, and he writes songs like “This Will Be Worth It” and “Who Are You” about how you should come back to him, etc. Which works better in song form than in real life.

Sennett’s efforts range from quite lovely (the strings-laden “See the Light” and “Time Is Coming”), to good fun (the Hawaiian ukulele strummer “Trip ’Round the World”), to overly long and point-belaboring (the Elton John-y “This Will Be Worth It”). It should be noted that Sennett’s whispery croon (a divisive characteristic that I happen to enjoy) sounds great here—at 34, he’s boyish and fragile as ever, if you like that sort of thing.

So, yeah, Bury Me in My Rings is yearning indie pop, sometimes overwrought, sometimes appealing in its dorkiness. Sennett may be on the wrong end of the cool spectrum nowadays, but if he’s at times thoughtful, at times spontaneous, and always free (like singing in your bedroom with no one watching kind of free), then, well, freedom is something that Sennett—whose last work (Under the Blacklight) was studio-controlled and personally fracturing—could use right about now. Maybe Bury Me in My Rings is messy and uncomfortably enthusiastic, but I’ll take that over detachment any day.