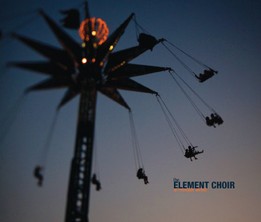 It’s easy to get bogged down in the concept behind Christine Duncan’s Toronto-based the Element Choir, so I’ll just give you the relatively brief version. A loose collective of around 200 vocalists (51 of whom are represented here), the improvisational ensemble operates according to a mix of intricate sign language, discreet direction and happy accidents. Avant-garde operas with interpretive “scores” and coded sign language aren’t new, but Duncan’s crew is both grander in scale and void of the usual conceptual apparatus that govern similar projects. Its aim seems to be to create an ongoing lexicon rather than craft a distinct narrative. The most fundamental guiding principle—that of imitating various elements based on the mood of the performance and the interactions of the accompanying musicians—might seem vague or flighty, but as a conceptual score it’s both more open-ended and substantial than, say, Anthony Braxton’s inscrutable diagrams.

The Choir is also as much an ongoing and always-shifting community art project (Duncan has even mentioned taking the idea on the road, drawing on local choirs) as anything else, connecting vocal improvisers and multi-disciplined artists or non-professional musicians who might otherwise have no interest in experimental music. It’s also something that should really be witnessed in person: there you have the chance to witness how Duncan’s simple hand gestures become seamlessly translated by the vocalists and how spontaneous eruptions in turn get harnessed and re-distributed by her directions. When they played the album release show at Christ Church Deer Park with William Parker, Duncan had the choir mimic a passing siren on Yonge St., a hilarious interjection in an otherwise softer moment in the performance. It’s these shifts in mood and the ability to respond to the other musicians as well as the environment—“elemental” definitely being the right word—that makes the experience so thrilling.

Considering that you don’t get this experience on a recording, it’s somewhat surprising how well the two day improvisation At Rosedale United works. The group makes full use of the opportunity to play the resonant spaces of the church, especially with the backing of Jim Lewis on trumpet and Eric Robertson on pipe organ. While there are moments of full-spectrum sound, the relative restraint is remarkable. “As the Crow Flies” contrasts scraping violins and distant horns with sudden full-choir shouts, manic chatter and idle conversation, as if merely gathering all the elements together for the aptly-titled “Funhouse,” a surreal, plodding parade of languid trumpet and imperfect harmonies. At one point, the latter track gives way to the arrhythmic thudding of toms and single bowed violin notes with the choir’s voices bubbling up in individual spurts like lava. That aspect of choirs that tend to make them ill-suited to freely improvised music—constant synchronicity, numbing wall-of-sound dynamics—are carefully avoided here. In this sense the choice to include non-professional vocalists seems less like a gesture of inclusiveness than a conscious aesthetic choice.

On the other hand, one of the things the Element Choir do well is to gradually filter in what most people would probably naturally expect from a huge choir and a massive pipe organ. The fact that these moments of naïve, seraphic beauty come out of silliness and irreverence is what makes them that much more powerful. On At Rosedale United that moment comes in particular with “Cloud Hands.” Initiating with what sounds like the organ from a Bela Lugosi film, the track seems to shift towards the sacred without warning, soft cooing building into a soprano solo where each line is echoed by the choir like a wordless liturgy. A whole album of this would be tedious, but coming out of (and returning to) formlessness, it carries a wistful transience.

Void of pretense, At Rosedale United carries a surprising familiarity. The music reflects innocence not by way of the strict non-idiomatic approach of a lot of avant-garde groups, but because it absorbs everything. This is the stuff of cartoons, melodramas and sacred choral music, of meditation and confusion, the sound of sweeping orchestral flourishes and instruments tuning up. Occasionally the number of voices operating at once cause it to smear—as it does towards the end of “Bird Calling”—though with any large-scale improvisation that’s pretty much to be expected. And even hear everyone eventually finds their footing, and the air clears for a minimal trumpet solo. Like any community art project, it is messy, but in the end it carries a sense of accomplishment that goes well beyond what any single recording could convey.