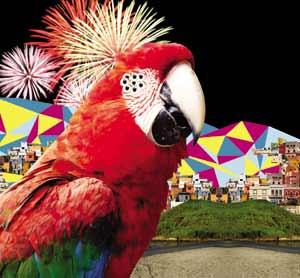 It’s 2008 and already our toes are getting splashed by Person Pitch‘s (2007) brackish spray of tidal pop, right? Initial listens to Alegranza!, debut album by El Guincho (a.k.a. Pablo Díaz-Reixa), can give off such an impression, though further digging unearths a couple key differences between the aforementioned artist’s jive and Panda Bear’s translucent opus: for one, El Guincho is more disposed to keep things jaunty where Panda Bear contents himself in gorgeous suspension; even songs on Alegranza! that mimic Pitch‘s more syrupy moments— “Fata Morgana”—only do so for a fleeting instant before El Guincho moves on to something more rollicking and percussion-focused. For another, El Guincho’s influences and sampled material are more obviously steeped in “world music” traditions. He’s an artist planting one foot in Western Africa and the other firmly in the Caribbean, so it’s not surprising that certain elements of his music (like the playfully elastic guitar on “Antillas”) recall the legendary Bembeya Jazz National, a group whose music brilliantly bridged those two regions, as much as the Avalanches, whose music bridged everything.

But once dried by an ocean breeze, seaside salt can get pretty nastily encrusted in your eyelids; likewise, Person Pitch is here to stay as one of modern indie pop’s widely recognized cornerstones, like it or not, and its impact on Alegranza! is undeniable, even if both were released around the same time and this one here became available in North America only recently through Other Music. Both albums’ unabashed appropriation of all of this world’s sunny and honeyed pleasures, for example, belies their techno-inspired methodology and structure. “Costa Paraíso,” for example, arranges each of its musical components one by one like constructing a wall with brick and mortar, letting each piece play out tirelessly before patiently moving onto the next. El Guincho pulls this stunt not just with his multi-faceted percussion and myriad looping samples, but also with his own voice, which through mesmerizing chants in Spanish erects taut edifices of melody that break only for occasional changes in motif.

El Guincho’s spiraling conceit ranges from downright addictive to maddeningly frustrating depending on how it is employed—and for how long. “Antillas” tosses enough contrasting vocal phrases and shimmying guitars into its rotating cauldron to stay fresh for all of its five and a half minutes. Augmented by a sample of what sounds like Middle Eastern vocalists, “Cuando Maavilla Fui” wisely ducks out after three and a half minutes before it can become stale. On the other hand, “Costa Paraíso” and “Kalise” lack the thematic diversity and changes in pace that infuse El Guincho’s other five-plus minute tracks with a sense of dynamism, and they subsequently linger for far too long. Now, I in no way mean to diminish or ignore the value of repetition as a potent tool, and definitive method, in dance music; like an unwieldy buzz-saw, however, that tool comes with limits—and dangers. One reason why (at least for me) last year’s From Here We Go Sublime proved transcendent rather than annoying was because Axel Willner edited each of his pristine loops to be austere and completely unobtrusive, slipping easily into the listener’s cerebellum fully lubricated while already friction-free. El Guincho works with a much pricklier medium, however, and his music accordingly grates when delivered with little prejudice towards monotony.

As an amalgam of mind-warping melodies and high-minded concepts, Alegranza! is more than deserving of our praise. Then again, El Guincho could have avoided the album’s key missteps by cutting down on the obvious Afrobeat tropes and experimenting more with traditional song-oriented vocals (as he does on “Prez Lagarto”) because, unless he can stuff enough diverse elements and movements into his polyrhythmic beasts with greater frequency and consistency, effectively celebrating his regional diversity without depending too haughtily on its novelty, extreme repetition might not be the way to go. After all, you can only play with that buzz-saw for so long before you get cut.