Other Records by Elliott Smith 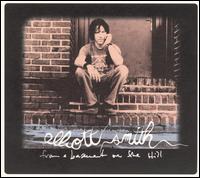 Elliott Smith: From a Basement on the Hill 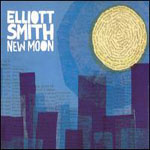 What is it about Elliott Smith's music? It's a question often asked, though perhaps not as often given voice. I should clarify: this question is decidedly not "Is this really as good as I think it is?" Because yes, it is. It is and it always has been as good as you thought it was the first time that leaden fog of melancholia drifted in and settled, hanging inches from the dewy ground. No, the question is one of causation: "Why is this so good?" The question lingers because of the tendency of this music to lend itself to inapt and overbroad descriptions. Try to get through any publication about this particular singer/songwriter without encountering the word "sad." It's like completing the Disney Store challenge; it just isn't going to happen. These descriptions aren't so much wrong as they are hopelessly incomplete, and New Moon is yet another example of how descriptive language seems destined for perpetual failure in the face of Smith's monolithic discography.

The paradox is that this is sad music, and it rarely pretends to be otherwise. These tracks are stylistically cohesive to a degree that would make them drudgery in the hands of a lesser artist. Each expository attempt at an Elliott Smith track is doomed by its own partial accuracy, and each is therefore misleading. The matter has become obfuscated even further by Smith's death in 2003. Now each song inherits a de facto "haunting" quality, and songs that were haunting in the first place become, I don't know, "sepulchral," or "really, really, haunting."

But we're beyond the point now where trite lamentation about the music he'll never make counts as insight. It seems superficially relevant, but it's a boorish consideration. It's eulogy-speak, and it is not for us to say. There is no one more fit to write Elliott Smith's eulogy than Elliott Smith, and he has written so many.

The 24 songs assembled here are a cross-section of his earliest, written between 1994 and 1997. They are characteristically and uniformly excellent, which is impressive (though not surprising) considering that New Moon represents the release of the third and fourth full discs of posthumous material. What's apparent in the stripped-down stretches of these songs is how Smith cut his work from whole cloth, recording fully realized outlines of songs in need of only minimal refinement before release. The honesty of Smith's songwriting is what allows for such polished first-draftsmanship. It is also what augments these staid arrangements with his signature intangibility. In "Placeholder" he refers to himself as "the invisible man with the see-through mind." His lyrics are instinctual reactions to the world, and so provide a clear and startling point of ingress into the perspective of someone harboring such a morbid disposition.

One need not sift through an Elliott Smith song to find its emotional core, and that kind of guileless soul-baring has disarmed many listeners, tricking them into hearing simplicity, into hearing "sadness." Smith foresaw this mislabeling from the beginning and is adamant in repudiating it. In "Looking Over My Shoulder" he sneers: "There's nothing I want to do / More than make another sonic 'fuck you' / To play / For every time you make my life cliché / So to fit / In some little box with all the label's shit."

Such pointed hostility is rare, and telling. In fact, one of the most important qualities that separates Smith from those who share his adjectives is his sense of restraint. This is perhaps displayed most effectively when it is almost lost. Yet even on angrier verses in "High Times" and the looming "Riot Coming" when his melodic whisper creeps up the scale toward a shriek, he manages to maintain an even keel. He ably tucks brutal self-reflection, isolation, and bitterness into harmonies sturdy enough to bounce contentedly along without creaking under their weight.

Many artists who stalwartly adhere to thematic bleakness seem, paradoxically, to revel in it, like some feral thing frenzied at the sight of its own blood. Smith at his most frank is a simple crystalline conduit for the pain of someone who carries an unmanageable weight. There is no editorializing of the experience here, and so there is no cognitive distance between the listener and the despair; its purity scores like acid, and there are times, especially now, especially after his death, where it seems indecorous not to avert your gaze.

But we don't. We don't because what Elliott Smith has accomplished here and throughout his discography is too singular and gorgeous. Even if we can't quite get our arms around it. Even if it is excruciating. When he sings, in his earliest recorded version of "Miss Misery," "It's all right / Some enchanted night / I'll be with you" one can't help but wonder if he believes it. This is one question Elliott answered for us. We all know how "Miss Misery" ends now.