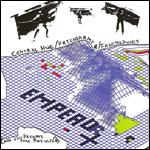 For some obscure philosophical reason I’ve never quite nailed down, the concept of a “one-man band” has never appealed to me whatsoever. While Stevie Wonder, Prince, and, more recently, Dungen have made substantial claims for the legitimacy of such outfits, the idea has always seemed drab and unromantic to me. While the aforementioned artists all possess astonishing virtuosity on a variety of instruments, their lesser moments feel like a lumbering heap of overdubs: stiff, deliberate, and completely unnatural.

Chad Matheny is not a virtuoso by any stretch of the imagination. Central Hug/Friendarmy/Fractaldunes, the Gainesville, Florida resident’s second album under the alias of Emperor X, is looser, faster, and humbler than the work of the aforementioned artists, and in many cases, a lot more fun. Throughout its eleven fast, jittery songs, it begins to feel more like the work of a talented kid toying around with his four-track than any kind of cohesive musical statement, which usually ends up working in Matheny’s favour.

Central Hug opens weakly with the wan “Right to the Rails,” but thereafter segues into three absolute stunners, which collectively threaten to swallow the rest of the album whole. The first, “Shut Shut Up,” is ridiculously catchy, with its sly and tossed-off lyrics reminiscent of some of Wowee Zowee’s great throwaways. “The Citizens of Wichita” is by far the most delicate of the songs here, with gorgeous reverberating guitars floating between Matheny’s simple but effective melody. Both songs are great, but they’re just foreplay compared to the joyous minute and forty-nine second “Raytrancer,” with its giddily plaintive melody and sparse keyboards sounding like the best kind of lo-fi Fountains of Wayne. And with a line like “Did you ever get sad on your bed late at night, crying listening to Either/Or?” it’s sure to melt the heart of every hipster that has one left.

It’s a given that the rest of the album can’t quite compete, but Central Hug’s second half does feature some gems -- like the tense, danceable “Sfearion” and “Adalogularl.A.,” which features what sounds like (but probably isn’t) a harpsichord. Towards the end, though, Matheny seems to be more concerned with constructing his songs than with composing them, with much of the second half lacking the tunes that he has already proven himself capable of writing, instead fluttering away with lame sonic gimmicks. It’s here especially that his voice -- an awkward hybrid of Ben Gibbard and Travis Morrison, with a bizarre way of emphasizing certain syllables -- begins to grate.

It’s clear that Chad Matheny is an exceptional songwriter, and a quick glance at Emperor X’s homepage makes his passion and enthusiasm for what he does obvious. Still, it’s hard to pin the meagreness of most of Central Hug’s second half on anything but laziness; his heart just doesn’t seem in it, and that overshadows what virtues the songs might otherwise have. Still, the album leaves an impression, and its best bits are truly indelible. If Matheny can only stay focused next time around, who knows, indie may well have its own Prince.