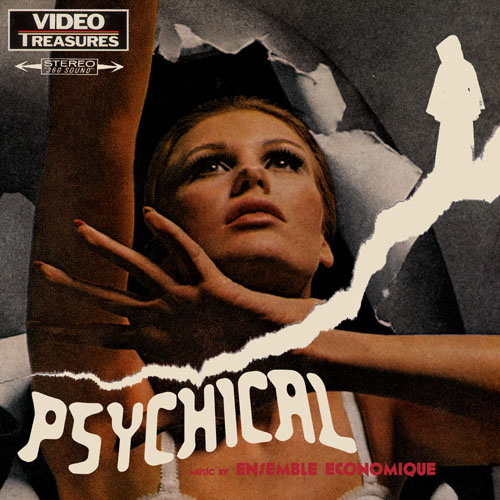 Described by its disseminator as “a total left-field BLAST of dark-synth radness,” Ensemble Economique’s second album might be the tipping point of Bryan Pyle’s sanity. He’s already displaying all the classic symptoms of hyper-vigilance—four CDs in under two years; quitting Digitalis for a smaller label; growing a Unabomber beard—but with Psychical, he may finally have gone one light-hearted seance too far.

Those familiar with his debut, 2008’s At the Foot of Nameless Roads, will know Pyle’s comfortable skirting the fringes of torture-folk—his mix of acoustic hallucinations and bloodbath guitars was what separated him from a host of drone wannabes. On his comeback, though, he’s turned torture-folk pro; you can imagine him wiring Willie Nelson to a copper grid and playfully increasing the voltage. The Ensemble Economique staples of orchestrated screaming, samples, and far too much homemade acid are pushed to the max on Psychical, the din now measured by an electric patter as Pyle winches you into the abyss. And no, this isn’t an abyss where James Cameron’s water aliens can save you. This isn’t an abyss where James Cameron’s bank balance can save you. Down here, you’re going to burn. You’re going to burn like a hippie doused in jet fuel.

The first surprise on Psychical is how Pyle’s shifted his instrumental landscapes: it’s goodbye to the poetic shorelines of two years ago, and hello to all the dark parts of the Congo. The entire album is rife with mysterious jungle noises, and I don’t mean jungle as in hardcore breaks from the ’90s—this is Dennis Hopper in Apocalypse Now territory, all hacked up cows and steaming mangrove. Pyle’s eagerness to capture the badlands hits its peak on “Shacks Built From Plywood,” where a roving reporter (possibly in Haiti?) is recorded crying, “All these shacks here are built from the plywood,” over and over and over. The springy beat of the intro suggests world music with headlice, and the processed church vibes and radar line might be a tribute to Die Hard 2, but by the time the Ensemble have begun scratching those impossibly long snail shells, you’re in territory with no signposts.

Don’t listen to this one on your MacBook—you’ll swear the beat is the sound of your trash being emptied and played back to you constantly. The same doubts flash through the opium noises of “RED for the SUN”: a mix of steam, dub, and incantations chanting, “Ray / Yellow sun / Blood / Zulu / Ninja / Danger / Marijuana.” Suffice it to say it’s the coolest thing here.

Occasionally, the sacrificial noises get a little overwhelming, and so EE switch to bleak machines to break up the caws and distortion. On “Monsoon Clouds,” the electric howl and machine touches seem to describe something jammed in a lathe, with some mangled bagpipes struggling to accompany it. If you think this jump to mechanics is designed to civilise Pyle, then think twice: if anything he runs even more amok when indoors, summoning up a hovering choir to help him spit on his pranks. These choristers get a voice of their own on the title track, where the lathe that had something jammed in it is now jammed in a big thing of its own, causing a cacophony of cylindrical knocks which Pyle drowns out with cash registers. If it weren’t for the use of rousing chords here then “Psychical”—both track and album—would be nothing more than a field recording of satanic cults taking control of laboratories. And that, white noise fans notwithstanding, a forty-minute album does not make.

Fortunately Pyle’s a little cleverer than that. He knows that bats, train brakes, and the function tone from automated lighthouses make interesting listening, but no one’s going to want to own them on vinyl. Perhaps that’s why “Hail” is one of the strongest cuts on the record; it opens Psychical with sweeping industrial lasers which burn like a slow fuse, but a slow fuse with the addition of bongos. Sizzling keyboards and smoky effects still retain all of EE’s mystery, but the two-note melody maintains order by sliding back and forth searchlight-style, keeping an eye on the camp. At last! Drone music for totalitarians.

If Pyle really has got an agenda then he’s doing a good job of hiding it. Perhaps the most incisive thing you can say about his sophomore release is that its wealth of dark variety will bring a lot of individuals together. Why else would he end with the likes of “Bonfires,” a number whose slapped drums, screams, and frantic maracas recall any good communal burn-up, but whose pay-off of shy but optimistic synth hints at something more profound in the fire? Who knows. You’ll never find any better music for watching a large crowd of people simultaneously lose their eyebrows.

If you do, however, write in.