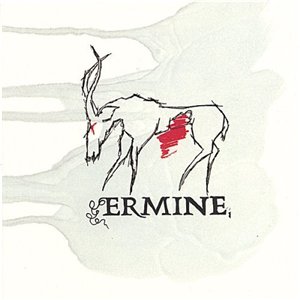 Full disclosure: I know these guys. I mean, we’re not BFF or anything, but they’re from my hometown, and in 2001 when I heard that brothers Mike and Matt Belyea and Chuck Teed (the re-articulated arms of a dozen other bands that had filled my high school years with various music) were working together it was an exciting prospect, as was the description of their sound offered to me by mutual friend Judd Crandall: a “metal/jazz fusion thingy.”

Seeing them play, I was equally at a loss for words. Ermine was more than the sum of previously disconnected parts; with such a short incubation period, this trio was amazingly tight. More thrilling, even with the discipline demanded by foraging in prog, jazz, and out territory—a wilderness many bands lose themselves in, standing aloof onstage, stares fixed on their instruments, hoping nobody caught the bum note in that lost song—here was a band having an absolute blast playing off-time fugues in the middle of thickly wound metal songs. I mean, I like King Crimson despite Fripp’s lonesome upstage stool, but what a pleasant experience to see a young band nailing their creative on-a-dime-isms while smiling (through punishing music) at each other, their audience, and the world.

Fantastic show done, however, I walked away uncertain why their songs hadn’t really stuck with me (not more than the covers they’d performed of “Teardrop” and the theme from Requiem For A Dream, anyway). I thought it might be a matter of indecision. Back then, Ermine was pushing outwards, a young band giddy with possibility, and falling into, though not actively scouting, the trails blazed by prog and chop-genre superstars. Which, fine (I didn’t necessarily want them to be Mr. Bungle, or King Crimson, or whatever), but I did think that a knowledge of their forbearers might help Ermine recast their ambitious-yet-unfocused arrangements. Whatever criticism I could levy at Mr. Bungle (it’s a long, painful list), their studio techniques, 180 turns, and random interruptions are built into the structure of their songs, and cosmetically and artistically (if not always emotionally) make sense.

My reservations were brought to greater clarity when I heard Ermine documented on 2003’s Maps of the Rise and Fall. Without the quirky tongue-in-cheek demeanor that had propelled these songs onstage, they lost a lot of luster; too serious to revision metal, too quirky to subvert prog, they simply sat there: infinite, complex, underwhelming. Maps was not a bad album, just one lost in an interstitial moment: was Ermine a trickster? Or a vicious predator? A young band needs to make a choice, right?

So I once thought. The Murra doesn’t solve these criticisms; it circumvents them. Instead of pushing into the ether and embracing the out-ramblings of Massacre or Painkiller, or conversely withdrawing into the heart-on-sleeve angst of modern metal, the band re-scripted their approach, fore grounding that initially hazardous schizophrenia as their biggest strength. Whereas Maps kept Er-trickster and Er-predator firmly separated, Jekyll/Hyding their appearances, The Murra understands that such poles are rarely binary. It fashions both traits (musically, thematically, and emotionally) in conjunction with, or as a result of, the other. Are the animals on the brilliant cover bleeding or bloody? Predator or prey? Answered here, it’s always both, always at the same time, always a spectrum we fluctuate between, a collapse which provides Matt’s lyrics new focus: here we see the complexity of animals, of 3 dimensional personalities, and how consent and coercion inform the mechanisms of power he describes, both in the macro-sense and everyday micro-contexts. In kind, the band throws away their sonic safety blanket, like Clark Kent’s glasses, of prog flourishes as a gimmick. Suddenly, which bands they’re apeing doesn’t matter so much as the way they fit those pieces into a complex and vibrant puzzle. And it’s the way they do it! They’ve internalized the tricks and skills and outward musicianship displayed so effectively on Maps into — get this — dense, complicated pop songs. They’re not really cross-pollinating, but the inward focus (musically and thematically) allows Ermine to deal equally in anger, sadness, and humor, without having to compromise. It’s a thing that a band like Tool could never do because they’re so bloody serious, and it’s exactly why Lateralus was such a painful seventy-minute suckfest.

The album’s first two songs act as DaVinci-like guides to the anatomies of Er-trickster and Er-predator. “Crystalline” floods your speakers with Black Sabbath sludge chords before tricking itself out with palm-muted verse patterns. The song’s ¾ signature steamrolls forward under Matt’s ascending vocal melodies (his lyrics are a bit formulaic here, but dude has been working on his pipes) as random glimmers and haunts of noise patrol the sidelines. The song changes time as two panned and phased guitars squabble at each other across panned channels; the initial sludge returns as a stop-start riff during which guitarist Matt stunt-hits single high notes with his thumb that ring in the cavernous silence between fully chorded thuds. “Velour” explodes upwards out of the debris, joyous Hum distortion and stuttering guitar hooks toppling over Chuck’s brilliant and giddy bass figures. The shift into the chorus (“You will write the only words / I will have the strength to read”) is ecstatic, and the band adds thrilling tension to the sawing guitars as the key changes with a simple vocal harmony.

“Creating Patience” Frankensteins the two bodies together, a barrage of conflicting emotions and musical twists. It starts hesitant, Mike’s drums all over the channels, before careening full-tilt into an off-time assault that almost defies the older Belyea’s attempts to squeeze percussion fills into every available crack. “The Choir My Hunters” operates over a surprising key-change in the verse that gut-kicks its tone; over the chorus, Matt’s voice echoes itself in harmony, gasping with resigned the lines “I don’t know / If I’m yours / Or you’re mine / Hunters,” which nicely echo the vagueness of the album art. “Witness” is good enough to overcome its familiarity; it has Matt harmonizing with himself over Chuck’s underwater bass and Mike’s funk snares as sometimes-member James Blanchard’s violin fluctuates between a strange acoustic intervention and guttural bow-scraping. “Over Index” begins with a clever reverse guitar drone that leads into a 90 Day Men-like math sequence; Chuck and Matt climb over each other’s scales as Mike alternates between emphasis on snares and hats. The bridge features Blanchard thrumming violin chords while the band plays revised march rhythms underneath; distortion finally loosed, the shouted coda falls somewhere between King Crimson and Les Savy Fav.

“Motel” is pleasant, but works better as an idea than it does in execution. The last two minutes show another side of the band, all beautiful cadences and bristling harmonies (the screams lodged in the back of the mix are chilling), but the slow intro required to achieve the effect is a tad overwrought. “Exit” features Mike on didgeridoo; it’s an interesting sound, but the intro seems tacked on as a place for him to use it, and the song itself quickly moves in an entirely different, and not very exciting, direction. “In Shapes” works far better. A full band workout, Matt’s vocals are pushed forward in the mix, and the constantly morphing arrangements in the background even give him some Patton-yelp opportunities. The song has all of these awesome Genesis/Hackett moments lodged beneath the veneer of straight-metal; it runs on regeneration, as opposed to iteration. “Hidden,” unlisted on the album sleeve, concludes the album with acoustic guitars and violins flitting across Chuck’s carpal-tunnel bass lines. Another of Matt’s standout vocal arrangements, his harmonies are captured in effects and whispers, and the verses are strangely reminiscent of Ok Computer-era Radiohead.

The expanded palettes and genre-blending allow Ermine to accomplish a lot with The Murra, even if they don’t quite allow the band to transcend their genre. And since the album speaks with Chavez and Hum as much as it does Isis and Mastodon, it’s working all the angles, a malicious trickster, coherent and well-informed. It makes me want to wait for their next one; I have a hunch this album is architecture, a launch pad that just might send this band downwards, heavenwards, and into space. These are well-populated frontiers, sure, but The Murra is proof that this band has stopped blindly tracking their victims. Here they are, more than skilled enough to carve out their own territory.