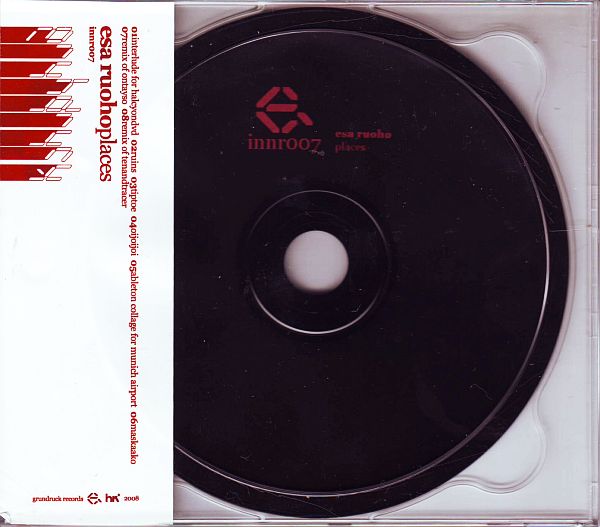 Following on from part one of Finland Today it’s time to venture into the darker side of the Land of the Midnight Sun with this latest from Esa Ruoho (gesundheit). An internationally-acclaimed software fanatic based in the shivering heart of Helsinki, Ruoho records primarily as Lackluster—the digital exchange student who got the locals hooked on Warp Records and laser shows. Recently, he’s been working under his birth name to access more darker, hypnotic territory, and has been braving some downright hellish headstates for his new album Places. I’m not sure exactly which frazzled landmass he’s trying to zap us to using this evil wormhole, but I should definitely warn that it’s time to spit your pill out if you’re expecting more IDM merriment. At times, Places sounds less like any kind of composition at all and more like a nightmare—expanding and fading in a forty-minute death rattle—brought on by ingesting raw sea-slugs. My advice? Keep the phone handy when listening to this one.

To say Ruoho’s switched gears with his black ambient droning is an understatement, as being improperly prepared for the eight tentacles of his record means you’ll most likely kill your system as soon as “Interlude For Halcyondvd” kicks in (that Myspace visit is compulsory training, folks). However, if you’re feeling suitably stormproof, there’s a rough beauty to be found in the gushes of the album. “Ableton Collage For Munich Airport” feels like the River Styx bursting its banks, hailstones and pitchforks crashing in the wind, while “Ruins” finds Ruoho living up to his Scandinavian Aphex Twin tag by taking a pair of medical electrodes to the “Carol Of The Bells” hymn. It’s ironic that that piece of music in its original form features prominently in the first Home Alone film, especially when you consider that Places could easily be born from Ruoho’s hang-ups that all the John Hughes movies lied to him. There’s a cinematic temper to his music all right, but you wouldn’t want your kids to see it released around their Christmas holidays.

Only during its final minutes does the album relent into a more orthodox electronic format: the oily beat of “Remix Of Ontyaso” makes for some rubbery dubstep, and “Remix Of Tenandtracer” signs off with a sunrise of gentle white flags. Whether both cuts are original or not has yet to be disclosed by the management, but they’ve definitely got the most in common with Ruoho’s material under his Bruce Wayne/Lackluster identity. Under his Esa cloak, though, it’s a different story entirely: dead machines leak ectoplasm into never-ending daylight, but something compels you ever onward, forcing you on through that alien weather. How much you’ll get into it depends somewhat on your appetite for snuff audio, but like Biosphere’s score for the non-Pacino Insomnia, at least the trauma is ethereal. You should treat its rating more as a warning beacon than a definitive numerical critique. It’s not an easy ride. Sometimes life is like that.