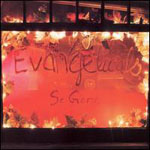 Evangelicals play indie rock. Not Garden State-variety post-Shins guitar pop; not overly sincere orchestra-folk; not New York avant-garde drone jams. Indie rock, the wild, heady kind inaugurated by Pavement and revitalized by Clap Your Hands Say Yeah last year. As such, So Gone is one of the best albums of its kind this year: it's loose, energetic and fun without turning to indie-pop cheese, dance-y without being ironic and freewheeling and unpredictable without sacrificing melody.

The opening instrumental, "A Mouth Full of Skeletons," is as good an introduction as any, a minute of rapidly gyrating keyboard and out-of-nowhere screams that leads right into the colossal stomp of "Another Day (And You're Still Knocked Out)." It sounds more like music for a rager than a hangover, until the guitars and drums drop out and the song flips over into a pretty psych-pop verse. Then, of course, it's back to gonzo guitars. Album highlight "Hello Jenn, I'm a Mess" uses a similar hold-on-to-your-hat dynamic, with singer Josh Jones screeching wildly and everything reaching upward until deflating into swaying, cavernous guitars. It's a mess on a casual listen, but closer inspection reveals careful craft -- whether it's an inserted lead guitar line or the inclusion of backing vocals, the song, like the album itself, is a celebration of dynamics.

The album's lo-fi sound makes it easy to dive into: recorded with just the right amount of reverb, even its freak-outs sound comfy. It never sounds too in-your-face - where Clap Your Hands Say Yeah's self-production resulted in a few moments of OKAY NOW WE ARE PANNING THE GUITARS, Evangelicals' style is so full-bodied and fast-moving that taking it all in requires a few steps back. Singer Josh Jones takes advantage of the swirling mess of his band, embedding his tenor deep into the heart of the mix. Amidst the ostensibly slapped-together chaos, Jones gets to fire off clever lines like "Loose lips sink another friendship," but you'll have to dig into the lyric sheet for more. He's at his best on the chorus of "That's My Headache," hitting high notes with clarion perfection and bathing himself in harmony vocals.

So Gone is another slam dunk for Misra Records after solid albums from Shearwater and Centro-matic, and a nice break from the label's usual more somber material. It's a shame that we, at least, passed it over during its summer release -- if you haven't heard this yet, you might be inclined to ignore it in favor of the 2007 models, but that'd be a mistake. Considering how cut-and-dry the new Clap Your Hands songs sound, So Gone is going to have to bear the old indie torch at least a little while longer. With an album this gloriously fractured and exciting, Evangelicals should be more than up to the task.