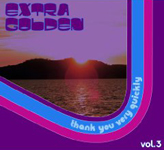 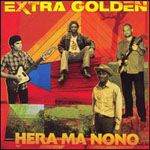 A product of a group that has struggled through a seemingly perpetual set of obstacles to bridge gaps more literal than those between genres, Hera Ma Nono is dumbfounding in that it manages to remain so carefree; while Extra Golden struggled to enter the States their singer died. They wrote eight songs about heartbreak and loss ("Hera Ma Nono" translates to "Love in Vain") or, in the case of "Street Parade," the citizens of New Orleans. Somehow the record remains infectiously polyrhythmic, accessibly groove-based, and fascinatingly textural. Like dancing about architecture, but as it crumbles around you.

A lot has changed since Ok-Oyot System was recorded in 2004, but the basic premise, that a combination of Kenyan benga music ("a guitar-heavy kind of dance music similar to Congolese Rumba") and American rock is a fertile ground for polyrhythmic inspiration, remains sound. It might be predictable at this point, but I think the best part of any cross-genre (to say nothing of cross-cultural) cooperative is that they demonstrate how arbitrary and market-driven genre divides are to begin with. Hera Ma Nono is a natural collaboration that plays on the strengths of both benga and rock, emphasizing technical precision and the locking of complimentary parts no matter how serpentine these long-running songs, like the very listenable "Jakolando" and "Obama," can get. Guitar work is intricate and interplays not with the vocals or bass as guitar so often does in traditional rock, but with often astounding high-hat work. The premium placed on rhythm and the presupposition of its universality is an open door to music that is often listened to as if it's been created for niche interest groups.

The group displays a staggering attention to detail and dedication to an idea -- as easy as it might be to compare Extra Golden to the admittedly vastly different Konono No. 1 by virtue of the shared traits of Benga and Congolese music, the two do share a sense that locking into a zen-like groove and riding it out works just as well as riding the roller coaster build-and-dip of much of electronic music's reliance on dynamics. Crescendos are antithetical, and too easy, for Extra Golden; maintaining an energy level, like a well honed mantra, is much more hypnotic.

It's still fair to say that Extra Golden will not transcend the barriers that keep much of World Music, no matter how terrible and condescending a modifier that genre label is, away from dance crowds more interested in Klaxons than Kuti. Where race and genre doesn't complicate such a listen as much as one might expect, age and clunky marketing certainly do. Moments on Hera Ma Nono sound a little AOR for a label as experimental as Thrill Jockey, and one suspects that a tasteful re-branding is all that's keeping Extra Golden and their fascinating dance music from the heights of legitimacy currently enjoyed by much less challenging, much less "World" bands.