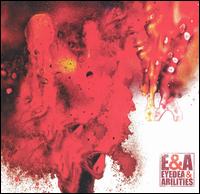 On the first track of their second album, E&A, Eyedea spits about how he's bored by "these pretty punk MC/DJ duo pseudo boy bands." This is, of course, understandable. The two man attack to hip hop has pretty much always been one of the most favored approaches in the genre, and this has bred hundreds, if not thousands, of rather dull, unimaginative groups. Of course, the hypocrisy of the statement lies in that Eyedea & Abilities don't do all that much to differentiate themselves from the mediocre.

Both members are certainly talented -- Eyedea probably more so -- but their styles don't mesh well and their combined efforts rarely impress. Their first album certainly showed promise, and so does E&A, but the machine is certainly not yet well greased. More than anything Eyedea & Abilities comes off as playing Roy Orbison to Non-Prophet's Elvis; yeah, Eyedea is a poor man's Sage Francis. Both focus on the DJ/MC dynamic, both take an old-school feel, and both MC's are battle champions (the more you think about it the more the analogy works actually).

Of course where last year's Hope from Sage and Joe Beats flourished (strong subject matter, self-deprecation, and wit), E&A falls flat. Choose any song off the album and it will either be: a) about how the competition doesn't hold a candle to Eyedea ("Reintroducing," "Now," "Star Destroyer," etc.); b)how love will hurt you ("Two Men and a Lady," "Paradise," etc.); c) a really shallow political song ("Exhausted Love," "Man vs. Ape," etc.); or a combination of all three (the particularly uninspired "Act Right").

If the lead single from the album, "Now," was indicative of the general caliber of the music the weaknesses in subject matter could be overlooked. Unfortunately pretty much nothing else on the album comes close to its energy, clever production and delivery. The beat starts off riding a series of scratches and a sample of (what I am willing to wager large sums of money is) an Andre 3000 yelp. Eyedea starts off slow and the first verse builds slightly, but after he takes a breath he launches into a speed rap that puts anything heard lately from Twista to shame. He pulls in and out of the delivery without so much as a breath, and if the speed rap had dominated the album it would have been far more interesting. Abilities does well on the track, meshing a one-note piano line under a quick beat and scratches that complement rather than overpower his partner.

It becomes clear quickly that the duo is a one-trick pony. Abilities only pulls out the speed rap one more time on the album ("One Twenty") and Abilities beats rely on vintage vocal samples, competent scratching, and tired constructions throughout. Eyedea switches up the vocal style occasionally (the affected voices on "Kept") but when the duo tries to be adventurous they tend to be at their worst. Case in point would be the abominable "Man vs. Ape," in which Eyedea takes the position of the stereotypical male, republican meathead but doesn't do anything creative with the idea.

"Paradise" serves as the seemingly contractual Rhymesayers emo-rap track. Eyedea does pretty well presenting the story of a relationship bereft of love, taking it from both sides of the issue and then addressing a lost lover. While the track holds together, the whole thing seems overwrought. Maybe I'm just cynical, but when the chorus of a song is "we've rediscovered the long-lost art of dying/I don't need a long lead resent angels for flying/twisted/living off each other's sickness, like parasites/this is paradise," I tend to wince.

While E&A certainly doesn't present a very impressive final product, it does show continued promise. Eyedea clearly has talent, and if Abilities style is better melded to his MC the duo could do quite well. As is, however, the combination comes off as unoriginal, a bit jarring, and eventually disappointing.