1. I Love You, Honeybear
2. Chateau Lobby #4 (in C for Two Virgins)
3. True Affection
4. The Night Josh Tillman Came to Our Apartment
5. When You’re Smiling and Astride Me
6. Nothing Good Ever Happens at the Goddamn Thirsty Crow
7. Strange Encounter
8. The Ideal Husband
9. Bored in the USA
10. Holy Shit
11. I Went to the Store One Day 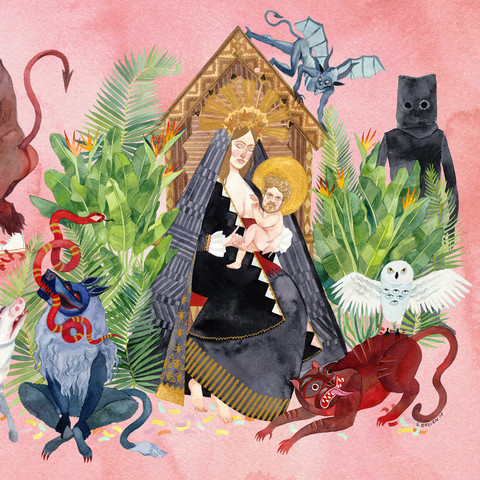 I Love You, Honeybear

When J. Tillman sings, “Oh, honeybear, honeybear, honeybear / Mascara, blood, ash, and cum / On the Rorschach sheets where we make love,” as Father John Misty on “I Love You, Honeybear” (seriously), he uses the word as its original purveyors—eleventh-graders—intended, as a pat-on-the-back for his fearlessness in the face of using a yucky word, a “hey-check-this-out” supplemented by a big ol’ word from PSYC101 to prove he’s got brains and a dick. The track, a paint-by-numbers mid-tempo puff of air, features other sub-Oberst one-liners, none of which are worth repeating here. (Okay, maybe just one: “I barely know how long a moment is / Unless we’re naked getting high on the mattress / While the global market crashes.” Bro?) That Tillman sings these things in character apparently gives him clearance to jettison such tired songwriting techniques as rhythm, evocative imagery, and taste.

About that character. Press materials bill I Love You, Honeybear as a “concept album about a guy named Josh Tillman.” That definition, of course, is a meaningless, cum-free bit of masturbation. In reality, how we’re supposed to conceive of Father John Misty seems to change depending on Tillman’s particular needs in a given time. And, on one level, fair enough. Misty is his creation; he can do with it what he will. But beyond that basic allowance, it’s not too difficult to see why Tillman would want the cover his moniker provides. Without it, his music is as unremarkable as a glass of skim milk. In lieu of exciting material on the record itself, the “character’s” lyrics give Honeybear a narrative for critics to lap up like that fat-free, watery milk. And since “Father John Misty” is half-sketched at best, with no fixed traits or discernible motives, Tillman gets to have his bland rice-cakes and eat them, too. If you like his music, he’s “clever” or “original.” If you don’t, you just don’t get the joke. That is, when Tillman wants there to be a joke—the amorphous nature of Father John Misty also allows him to enjoy the fruits of a muddled tone, making Honeybear a sort of Lazy River of various half-assed emotional states passing you and your inner tube. Here’s a bit of self-loathing, maybe. This could be a moment of earnestness, perhaps. Hey, is that a scrap of silliness? Who knows. Float me that cooler full of beer.

Of course, none of this would much matter if Tillman had the songs. Instead, he has a powerful voice—he was one of those dudes harmonizing in Fleet Foxes, if you remember them—and a gift for pulling his punches. In “The Ideal Husband,” the best song here, he undercuts a rousing climax (“I came by at seven in the morning / Seven in the morning / Seven in the morning!” he shouts, over and over, in one of the few moments on the album where he seems to have considered how his words actually sound) with a dumb lyric about “putting a baby in the oven,” another half-hearted joke, the punchline being—what? Oh, right, that he’s not an ideal husband, because he can’t even get that cliché right. Rather than commit to the emotion of the song—emotion he’s actually earned, for once, by building tension with the track’s rollicking rhythmic pull—he shrugs it off for a laugh, the provenance of the insecure schoolyard comedian, the one hiding a thirst for acceptance behind cheap jokes and prankster posturing. In other words, the kind of dude who still expects it to titillate as a matter of course when he drops the word “cum” in a lyric. The music itself, a hodgepodge of Suburbs (2010)-era Arcade Fire strumming, Okkervil River bar-band eclecticism, and any number of other polite NPR signifiers, slides from memory as soon as the final notes end in each number, the musical version of that movie Memento, except a good deal flabbier than Guy Pearce. I Love You, Honeybear is an audible fart in a piano bar—marginally more entertaining than the standard fare you’ll hear there, but do we really need to high-five this gasbag?