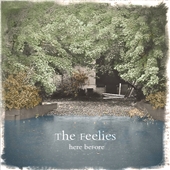 One of the more charming characteristics of the Feelies over the years has been the way they’ve gleefully ignored prevailing trends. When the band debuted in 1980 with the cult classic Crazy Rhythms, the trends in post-punk skewed dark, methodical, and confrontational. The Feelies, by contrast, were dweebs with horn rims from New Jersey trading in the some of the most tightly coiled guitar pop in the American underground. In fact, the Crazy Rhythms sound would prove so unique that the band never again attempted to replicate it. Following their debut the band went on hiatus, and when they returned in 1986 with a revamped line-up, their sound reflected the shift in personnel. But once again the resulting album, The Good Earth—whose release straddled the tail-end of first wave hardcore and the emerging sounds of the grunge generation, but which aesthetically amounted to folksy ’70s strum and laid-back Velvets harmonizing—didn’t exactly tap the zeitgeist.

Even the band’s current reunion seems obliviously timed. Six or seven years ago the Feelies could have parlayed a bit of the goodwill retroactively bestowed upon post-punk godfathers Wire and Gang of Four into some sustainable traction of their own. Instead, the almost too appropriately titled Here Before arrived in a similar fashion to every Feelies album before it: with little sustainable buzz and little (if anything) linking it to current trends in indie rock, but with a clutch of delightful guitar pop songs as if to remind us that this kind of stuff, when done right, just doesn’t really go out of style.

Twenty years between albums is a long time for any band, and yet the Feelies still sound like they haven’t listened to anything but Loaded (1970) for the past thirty. I mean, sure, the ceiling for Here Before is pretty low, yielding rewards equal-to-but-not-at-all-exceeding whatever it is the listener brings to the table, yet it also evidences a band continuing to operate for the sheer love of making music. I doubt Feelies leader Glenn Mercer is even aware of the term “hypnagogic,” which is refreshing nowadays when every new release comes bearing the strain of the online aggregated community. Which is to say that Here Before could have come out in 1987 or 2027 and my feelings about it would be more or less the same: this is a good album with a lot of easy-going songs that sound pretty much the same. Luckily, there’s enough of that effortless Feelies charm to keep me listening and enough of those small compositional details that are easy to take for granted amidst an indie landscape increasingly sustained on promises of instant gratification.

Take opener “Nobody Knows,” which sees the band lay into its jangly chord progression almost immediately while Mercer casually tosses off self-referential half-thoughts such as “Is it too late / To do it again / Or should we wait / Another ten?”, as if his band could have re-emerged unscathed at any point in the last two decades. The album almost uniformly progresses in this fashion, with only subtle instrumental asides (check the J Mascis-lite guitar solo on “Should Be Gone” or the furious forward thrum of “Way Down”) and slight variations in Mercer’s vocal tone (his breathy Ira Kaplan approximation on mid-album slow-burn “Change Your Mind” is particularly pleasing) distinguishing one track from the next. By the time the title track arrives two-thirds of the way through, the album’s elegiac tone really begins to establish itself. “Everything looks familiar / Like I’ve been here before,” Mercer laconically intones over the nostalgic opening chords, before lifting the pastoral spell with a yearning bridge which hits like a pillow-soft climax courtesy of co-guitarist Bill Millions’ sparkling production.

What eventually holds Here Before back from the upper tier of recent reunion records—say, Polvo’s In Prism (2009), Wire’s first two Read & Burn EPs (2002), or Mission of Burma’s The Obliterati (2006)—is this very lack of progressive spirit. Never once across the albums thirteen tracks and 46 minutes does it feel like the Feelies are pushing themselves out of their comfort zone. Which is fine: they’ve set the stakes low here and the band hits its targets purposefully and accurately throughout. Despite its casual and welcoming demeanor, Here Before is as much an album for Feelies fans as it is for the band itself. And if they set out to prove they could still lay down an agreeable set of pop tunes then they’ve succeeded. Sure, the record isn’t very functional outside of its given context, but if you’ve tuned into this program before then it’ll be nice to know that one of the most congenial of indie pop acts can still deliver on their good name and to their respective audience in equal measure.