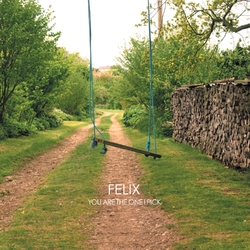 You Are The One I Pick

Kranky’s been involved in some strange business as of late. Since signing Deerhunter and that band’s various solo projects, it seems almost as if the label’s become comfortable with things like singing and songwriting, which they’ve shied away from for so long. Felix’s first release, You Are The One I Pick, a collaboration between Lords guitarist Chris Summerlin and Stars of the Lid touring player Lucinda Chua, reinforces this. My favorite description of SotL’s music is “divine classical drone without the tedious intrusion of drums or vocals”; despite the fact that Chua has worked with that band, and there are drones, this music works in an opposite space. For the most part, this is a mean-sounding, sometimes singer-songwriterly record built on piano, vocals, guitars, and even drums.

If it is a singer-songwriter record, the best point of comparison is probably Nina Nastasia’s collaboration with Jim White, You Follow Me (2007). Elv Beetham plays the drums a bit like White does, and he often refuses to provide simple backing as his instruments instead drift in and out of songs; the percussion exists largely as a tool of tension, as does Summerlin’s guitar. The chords that hold the songs together—both vocal and piano—rarely get to control the mix, where strings take precedence. Consider “Death to Everyone But Us” and “You Are The One I Pick,” easily taken together given that one moves straight into the other. Satie-like piano flourishes and fast-moving bowed passages get far more agency than Chua’s speak-sung vocals on the first, and the second opens with a much more straightforward piano/drums/voice arrangement but Summerlin’s guitar, mixed across both channels and at a significantly higher volume, disarms it completely. Even when first approached, the record’s seemingly innocuous presentation proves far more disorienting and strange than it does at the outset, as if Chua and Summerlin wanted to make music with very conventional instrumentation, free of noise, that refuses an easy approach.

The record pushes into different, yet seemingly more honest territory in its second half. “Waltzing For Weasels”‘s first verse includes the lines “You raped all the girls,” as well as “You’ve got the prettiest face I’ve ever seen / but you’re so Vice magazine”; these jump out both because of the drastic change in sentiment, but also because this doesn’t sound like music that could possibly exist in the same universe as whatever it is that Vice is into right now (probably drugs). Chua’s piano work here is especially gorgeous, and it moves directly into “What I Learned From My TV,” which opens with a guitar drone worthy of SotL before Chua’s vocals enter and come across not so much as cold as aching, her anxieties whispered and mixed so close that it creates alarming, uncomfortable . “Back in Style” opens on a Twin Peaks reference (“That gum you like is going to come back in style”) before taking on a more conventional arrangement thrown off by speak-singing and rhythmic discord.

Chua’s piano becomes more and more willing to play easily-followed chords as the record progresses, and her lyrics become more straightforward. “Song About Zoo,” arguably the most sweetly-sung of these songs, is the culmination of this, simply coming to an end a minute and a half in after Chua’s threatened to sell children and a cello has tried, and failed, to move it further along. To You Are the One I Pick‘s favor, for almost every moment that should yield something generic, something happens to stop it from falling into the traps of quirky pop. It has moments that get precariously close, though—most notably in the stretch between “Ode to the Marlboro Man” and “Where Is My Dragon?” where her anger occasionally borders on the whimsical.

Unlike Nina Nastasia’s, Chua’s songs don’t yet fully carry themselves. Without its disorienting production, this record could still find an audience, but likely not with Kranky, as this is nowhere near as approachable or commercially viable as anything Bradford Cox has released since the first Atlas Sound album. Regardless, there’s much worthy of investigation in You Are the One I Pick‘s ten tracks. Whereas another excellent release this year, xx, focused overtly on conversation, Felix’s uses the second-person address and the confusion it—as well as conventional instrumentation played in freer forms within more confined song structures—creates to produce an engaging, if harder to parse, take on something similar. Even if what that is isn’t entirely clear.