Other Records by Film School 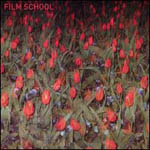 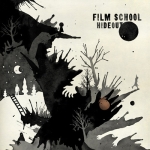 Alas, Film School is back. The new record opens with a minute of compressed, noisy guitar and synth-drone, a sign of things to come, a note that a band known for distinguishing the best elements of the Shoegaze Canon (ample amounts of delay, layer after layer of androgynous backing vocals, reverse guitar loops) will be taking their sweet time building the tone throughout. Hideout is the third full-length from this California gaze-pop outfit led by guitarist/vocalist Greg Bertens. Ten years into the game and -- in relation to its primary influences, Loveless (1991)-era My Bloody Valentine and the Jesus and Mary Chain's Psycho Candy (1985), presenting a slightly less-abrasive sound but still stacking on reverb, pitch-bending heroics, melodic guitar/tape tricks, lovely airy vocals, and mechanical backbeats -- this effort is their most cohesive album yet.

When the opening song "Dear Me" kicks in it's with tightly played and crisp-sounding drums and then the vocal barrage characteristic of so much of the record's production settles into place; voices all over this mix. As a rule, Bertens sings a lead part (seriously, there's no telling how many times he stacks different takes on top of each other) and then drops background "oohs" and "aahs" into the mix indulgently. Those backing parts are so spacey it's sometimes tough to tell whether they're guitars or voices.

"Sick Hipster Nursed By A Suicide Girl" absolutely validates its potentially unbearable title by just being what it was born to be, that's a bad-ass song, a banger, with, yeah you guessed it, waves of guitar, stacked vox, and a drumbeat that could have been pulled from an early Jesus And Mary Chain single. Somewhere in Omaha, Todd Baechle of the Faint shudders with past memories of chemical nights and regretful lipstick-smeared sunrise: "All the make-up can't hide what's inside/I doubt you're all right/She's always by your side." During the breakdown at the end of the song, the band pulls back the bass and drums leaving a hurricane of guitar drone that washes over the listener for about a minute before bringing back the rhythm section and jamming out for another two minutes. The effect is riveting. [That sounds totally sweet. -- Ed.]

What's more: the sea-sawing guitar hook on "Lectric" is killer and the dreamy, repeated lick on "Plots and Plans" ties together the vastly conflicting back-and-forth duet between Bertens and his girlfriend. Hideout's vocal parts, often comprised of simple melodies, are catchy too, repetitious, delicate pop structures hiding behind the squall. Take those angelic pitch-shifting backing "ooohs" on "Compare" perfectly complementing Bertens' endlessly-repeated phrase (another simple and spot-on observation): "I can't believe the things you'll say / To keep me here and around by your side."

Ya know, I think it's cool that Film School dropped a record that demands to be heard as a full-length, that they probably could have shaved a couple of tracks and made it an even tighter experience, saved something for the b-sides like the five-minute "Florida" which arrives near the end and provides nothing that progresses the movement of the album, because I accept the whole as a commitment to a well-stitched, harried ambience. However, the last song, "What I Meant To Say,” happens to be the biggest rock n' roll doodah on this record, with its loud guitars and crunching beat (provided by the ever-reliable Colm O'Coisoig of My Bloody Valentine). Probably the most single-friendly track on the list and it's funny that they pushed it all the way to the back, seemingly and perhaps obviously not letting its immediate accessibility get in the way.

What Film School loses in the cohesion of all these tracks is the undeniable standout hits of their earlier, more uneven work. The Always Never EP gave us one of the best space-pop songs of the decade (yeah, I wrote "decade" -- go get yer download-on) with "P.S." and the self-titled Film School delivered the impressive Floyd-esque rocker "He's A Deep Deep Lake" and the post-punk stomp, "11:11." Still, Hideout is a fine effort, probably one of the better headphone experiences of the year. Haters will complain, "It all sounds the fucking same," or whatever, but let the educated shoegaze veterans berate back: here is one of our distinguished alumni, one of our best.