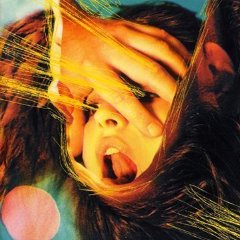 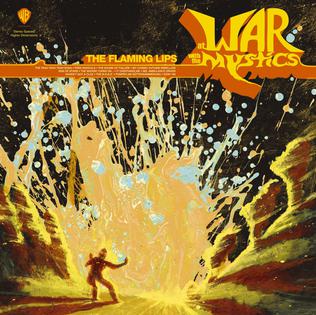 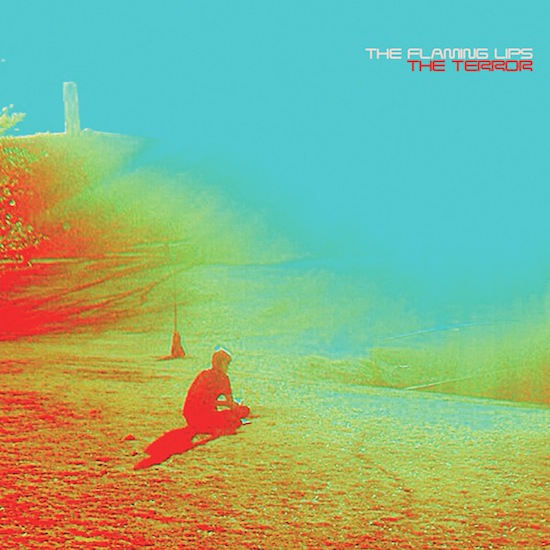 Of the myriad things Wayne Coyne has said in the press tour behind The Terror, the Flaming Lips’ thirteenth album in thirty years, one rings most true: “I don’t know if it’s dark,” he told DIY, “Or it’s just not light. There is a difference.” Indeed, and that difference lies in the type of acute detachment that the band’s moony affirmation of life too often and too easily averts: the process of actually stepping back and realizing that life has no lightness or darkness to it, things just happen and we assign them value for the sake of sanity. Bleak is a better word than dark to describe The Terror, and frank better still: this record quietly and calmly observes the as-is world beneath such alien whirring and colorless noise that it seems the band is intercepting radio waves or dystopian government broadcasts instead of consciously recording sound, the same bells and whistles typically wielded to abet its sunny messages now out of its hands. The result is a wondrously singular and Sisyphean effort—structured loosely but conceptually tight—that when viewed through the right lens shows the band at its most brutally alive, if also its least lively.

Decoding why the Lips made this record is certainly a game, the potential explanations many. Perhaps it’s an art of scaling down, especially after the intriguing but fatiguing Embryonic (2009), and a subliminal reaction to the fact that the band’s overblown spectacle—lights, confetti, furries, and fumes—has been shamelessly adopted and aggrandized by the EDM scene (among others), whose music manufactures the same highs that the Lips are more prone to organically celebrate. It’s just as appropriate as the band’s first record of Obama’s second term—symbolic hope buckling beneath the grit of reality and consequence—and maybe more pointed a critique than “Every time you state your case / The more I want to punch your face.” The Terror could also be a confessional record born of Coyne’s romantic split and Steven Drodz’s relapse, rare brooding from a band that’s previously used cartoon characters and bug metaphors to write personal drama out of their music. Or, most probably, this is just what happens when a bunch of weird-to-begin-with old pros record an album exclusively in wee and sleepless overtime hours, content along the way to “make shit up as we go”—another Coyne chestnut from the DIY interview—and historically incapable of doing much of anything but to its extreme. In any case, The Terror has an echo to its shock, more so for the unclear mechanisms behind it.

Much of the record’s strength, ironically enough, draws from a consistent sense of powerlessness. Lyrically, Wayne Coyne seems shrunk to the size he was in second grade, presenting naive commentary and the sorts of eternal questions whose weight a child can barely comprehend at the time of asking. “What will love us?”, he asks at one point; “Is love the god that we control?” at another. He mentions the sun on more than half the songs here, maintaining primitive fascination with the fantastical orb that regulates life, and his melodies—slow, repetitive, and sung in an upper register like peculiar little sing-alongs—are whispered or faded to the point of incomprehensibility, specific words and phrases washed over by the arrangements. The impression is that whatever universe the Lips have hacked into on The Terror is indifferent to petty nitpicking over its design; Coyne, wide-eyed and feeble, raises infinite questions of his world and is offered in the place of answers an unsympathetic shrug.

The music, then, is what defines this record—another strange irony given how unmusical it is. Take “The Terror”: the rattling beat channels party music aboard the Prometheus, a near-bhangra drum line dueling against buzzing chimes and android insects. Its chorus is a repeated two-note dirge not unlike a colossal doorbell drawn out and distorted. Other recurring noises include the countdown-to-self-destruct tone, which underscores both the bizarre meditation of “You Are Alone” and “Try to Explain,” the most gorgeous Flaming Lips song since “Feeling Yourself Disintegrate,” as well as the mechanical scratching in “Look…The Sun is Rising” and “Butterfly, How Long It Takes to Die”—a sound like robots approximating syncopated funk guitars based on some old vinyl they unearthed. “You Lust,” perhaps the track structured most traditionally, is also most polarizing: at thirteen minutes, based primarily on a hypnotic synth groove that openly references Pink Floyd’s “Young Lust,” it weathers your patience while seeming to recruit for a futuristic military outfit, indecipherable propaganda-babble included. All in all, the album maneuvers on one vast and demanding texture, sexless and soulless and grey. It doesn’t score such heights as the band’s meditative mid-career opuses, but the neutered and droning soundscape endows The Terror with the undeniable quality of being ageless.

Across a set of lyrics that reads like apocalyptic newspaper clippings, Coyne works a particular gem into “You Are Alone,” barely audible over the song’s rustling aural creep: “I’ll have to live beyond reality’s dream.” Cosmic bandleader that he’s become, one element of his power is the uncanny ability to construct a porcelain existence, one that separates him as an artist from the grind, and on this album you can almost hear tricolored walls crashing down to reveal the same exact environment—sun, stars, and all—persisting nonetheless. Such an uncaring world can be crushing to someone who’s worked so hard toward euphoria, yet these compact and exploratory songs still steer shy of misery or outright depression. More accurately, The Terror is an unselfish view of a world free of human manipulation, and as such is a staggering listen to fans accustomed to the Lips’ sheeny pop orchestra and, before that, their lo-fi quirk. It’s the sound as the band notices and narrates a massive shadow while unable to see what’s cast it.