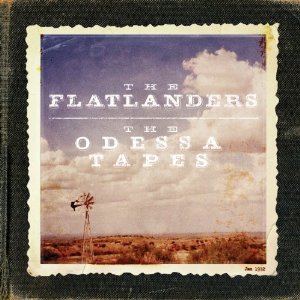 The Flatlanders are the most magical of bands: little-known and elusive, they possess the ghostly sound of the lonesome (and archetypal) American West, that desolate buzz of shortwave radio and broken pay phones and neon motel signs. You feel like you’ve heard them once in a dream, inside the the perfect truck stop diner that you can never, in reality, seem to find, sitting in a dimly lit vinyl booth, waiting for that last piece of pie when from a tinny Wurlitzer speaker in the corner it crackles: the strains of Jimmie Dale Gilmore’s reedy, gentle voice. You think you can make it out, a soundtrack fit for this particular American fantasy. But then you wake up, and it’s lost in the ether.

In a way, I’m glad I’m not old enough to have heard the Flatlanders when they were playing around Lubbock, Texas for the first time in the early 1970s. Because the only album they released that decade—an 8-track recording—would have only prepared me for two decades of being haunted by those melodies that seemed to exist only in my memory. And while many were finally committed to record in 1990, on the aptly titled More a Legend Than a Band, an almost stupidly perfect collection of vintage country in the vein of Hank Williams or Willie Nelson, that first batch betrayed a dark and mystical bent: slippery slides, a spooky singing saw, and the eastern religious influence that often crept in, revealing hidden depths to these three Texas boys with hillbilly names. These: Jimmie Dale Gilmore; Butch Hancock; Joe Ely.

After the release of More a Legend, the Flatlanders slowly drew back together and reformed in the ’00s for a series of three new albums and another reissue. Yet The Odessa Tapes is a nearly-forgotten relic, a demo recorded in 1972 just before the Nashville sessions for More a Legend. Distinctive lead vocalist Gilmore, now a successful solo artist perhaps best known to my generation for his brief turn as Smokey, fragile, conscientious objector and target of Walter’s rage in The Big Lebowski, shares songwriting/singing/guitar duties with Ely and Hancock (though many of these songs were written by others). They are joined here by Sylvester Rice and Tony Pearson on harmonica and bass, and Steve Wesson on that inimitable saw.

The Odessa Tapes was recorded in the Odessa, Texas studio of Sun Records’ Tommy Allsup. It was a session set up at the urging of Flatlanders fan and radio personality Lew Driver (“Country Lew Dee”). Nothing much came of the demo, which Rice put into storage and quickly forgot. But the recently rediscovered tapes find the band in the very finest form, performing some of their most widely recognized tunes coupled with some otherwise unrecorded tracks. They’re laid back and loose, harmonies coalescing, doing what they love with “not a thimble-full of ambition” (Gilmore’s phrase from a recent No Depression piece), and creating a thing of real beauty in the process. A surprisingly quality recording of an incredible set, The Odessa Tapes plays like what it is: a miracle shrouded in modesty, and an ephemeral moment in time. But it’s just like the Flatlanders (whose idyllic history is gorgeously rendered in Michael Ventura’s liner notes) to shrug their shoulders at the delay, and keep on keepin’ on.

Case in point is opener “I Know You,” an Al Strehil tune which doesn’t show up on any other Flatlanders recording, but may just rank up there with the very best. A trembling, somber guitar backs Gilmore and Ely as they sing in harmony: “You say you’re never sure just who you’re looking for / You never found the one to lay your love before / Well I don’t claim to be the answer to your only dream / Whatever else you seem / I know you.” Strehil’s words invoke that characteristic Flatlanders simplicity: cut straight to the quick, at once optimistic and level-headed. And the record just flows effortlessly from there; through the mandolin-heavy “Number Sixteen” to their most famous song, Gilmore’s “Dallas” (which opens with the memorable question, “Have you ever seen Dallas from a DC-9 at night?”), to Butch Hancock’s achingly lovely “Stars in my Life,” the ultimate lonely highway song, tailor-made for the open road or range. “Though this universe collapses on occasion / The stars in my life will stay in place.”

It may be ridiculous to mention, but there are times nowadays when we, as music fans, lose track of that sense of magic that music can provide, that way that it has of blowing the whole world open so that it feels vast and mysterious, with endless creative reserves left undiscovered. What’s so wonderful about this record, this new discovery, is that the Flatlanders long ago restored that sense in me. Most importantly, though, when I hear the ancient-sounding harmonies of Gilmore, Hancock, and Ely on “Dallas,” when I hear the spiritual “Bhagavan Decreed” flow unhindered into the pared-down “Tonight I Think I’m Gonna Go Downtown,” I can feel the bottomless faith these spiritual cowboys have in the beauty and gravity of American music.