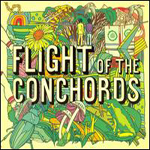 As CMG readers with premium cable might already be aware, Flight of the Conchords consists of Jemaine Clement and Bret McKenzie, New Zealand’s fourth most popular folk-comedy duo. Their thirty-minute HBO sitcom finds them wandering around New York City’s Lower East Side and dealing with a host of issues that confront most fledgling NYC bands, some of which include obsessive fans, fame hungry groupies, and an incompetent manager only capable of scoring them the crappiest of gigs. It’s easily the driest half hour of comedy on television, though frequently hysterical. And its worldview is so narrowly confined to NYC hipster-dom circa 2007, that my fiancé and I are often surprised that anybody other than twenty-somethings living below Fourteenth Street and east of Fifth Avenue finds it funny. This is belied however by the number of fantasy sports teams I’ve seen named “Hiphopopotamus,” not to mention that ESPN anchors have been known to proclaim “business time!” on highlight reels whenever sluggers like David Wright or Prince Fielder jack one out of the park. FOTC also just recently sold out two consecutive nights at NYC’s 2,500 seat Town Hall in under an hour.

Each episode of Conchords always contains at least one of the duo’s compositions in music video format, and this self-titled debut serves to compile them. And excepting a few that really don’t stand alone outside of a given episode’s context (e.g., “Leggy Blonde,” an ode to the woman who happens to be installing computers at the New York branch of the New Zealand tourist bureau that day), the songs hold up to repeated listens surprisingly well. Conchords is essentially a musical comedy album along the lines of something by Spinal Tap or Tenacious D, but it’s far more laid back than anything either of those acts have committed to wax, and actually shares a lot in common with a garden-variety Ween album. Like Dean and Gene before them, Bret & Jemaine’s strengths lie in send-ups both obvious and subtle, but they never bludgeon the listener over the head with their cleverness (cough, Jack Black, cough), and seldom let the comedy get in the way of a decent tune.

They would appear to know their audience too. The average Conchords fan will likely own enough David Bowie albums to find the “Space Oddity”-flecked tribute song “Bowie” damn funny, and those same fans won’t fail to realize that “Inner City Pressure” is a dead-on “West End Girls” spoof. They’ve got a French New Wave number (“Foux du Fafa”), multiple songs in which they approximate gangsta toughs (“Mutha’uckas,” “Hiphopopotamus v. Rhymenoceros”), and even an Antmusic deal where Bret proclaims himself the “Prince of Parties” after ingesting a half tab of acid from some sketchy female fans (yours truly has seen every episode).

But the real reason any Y-chromosome starts a band is to meet girls, and it’s unsurprising that Bret & Jemaine’s finest songs are devoted to the topic of the fairer sex. The slinky acoustic guitar funk of “Ladies of the World,” with shout-outs to ladies “Bolivian…Namibian…East Indochinian…Republic of Dominican,” is a catchy and hilarious high point, while “The Most Beautiful Girl (In the Room)” and “Business Time” showcase the duo’s questionable seduction skills. “Business Time” in particular is a stone-cold classic, portraying an all too realistic pre-coital ritual between a live-in couple. Jemaine knows that it’s business time on Wednesday night, and Wednesday night alone, because “Monday is my night to cook…there’s nothing good on tv [and] you haven’t had your after-work social sport practice, so you’re not tired.” And of course the brushing of teeth “is all part of the foreplay,” even if sorting the recycling is not (“but it’s still important”).

Flight of the Conchords ultimately succeeds apart from its parent television show because it’s a modest comedy album. It runs a little over 40 minutes, there’s no between song skits or show dialogue, and the vibe is mellow enough to almost constitute “easy listening,” albeit spiked with frequent bouts of laughter. It’s subversive, too. Give it a few listens and see if you don’t start raving about “too many mutha’uckas ‘uckin with my shi-!”