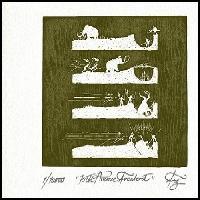 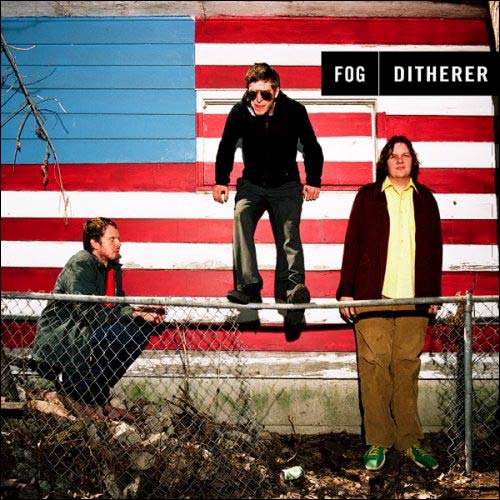 In my, um, “review” of Fog’s 10th Avenue Freakout (2005) I tried to simultaneously illustrate my reservations and prognostications for Fog by describing Andrew Broder as an “artisan of the off-kilter that will accept years of his own frustrated teetering in hopes that he will one day mutate, that he will become a freak with six toes on each foot, and that extra digit, that badge of odd evolutionary privilege, will help him stay on his tight-rope — at least more than usual.” And then (I swear I wasn’t high) Fog walks away from me, practicing his act on a pavement crack with “little fleshy nubs that grow like purposeful warts on the sides of his bare feet.” If I can presume that any of that makes any fucking sense at all, I guess I can also presume to say, “I told you so.”

Ditherer is a far-flying leap above and beyond anything that Fog’s done before, but not a shocking leap because it’s still very clear that this is Fog; you can hear the ancestors, the Freakouts and the Ether Teeths. But just as Dose One found a home for his most supreme ambitions in the post-everything group Subtle, so Broder here re-keys Fog into its most effective code yet, a three-piece band with Mark Erickson on bass and Tim Glenn on drums, Broder shredding a six-string. So Broder says on the EPK: “This is our debut album.”

And like Subtle’s A New White (2004), this debut album is an exciting paradigm shift marking the passage of a talented eccentric into the center of a bigger and more collaborative enterprise (guest list: Why?, pedestrian, Phil Elverum, Andrew Bird, Dosh, Alan Sparhawk, and Mimi Parker). The methodologies and ideologies themselves are not nascent as Subtle was developing theirs on the EPs they released before A New White and Fog was defining his with the records that were basically just “his,” but the true announcement of those forms feels very planned in both the cases of A New White and Ditherer. Like not telling anyone you’re having a baby until the beautiful little thing is born, fully realized.and yet not at all matured.

In a correspondence with Aaron Newell, CMG’s liaison to the stars, Broder talks of wanting “to encapsulate everything that I love about music into Fog,” and that’s an everything that includes “U2, Jimi Hendrix, John Zorn, Mr. Bungle, Radiohead, Adam Drucker, Minneapolis hip-hop, jazz, classical, folk.” And “Death metal.” And to varying degrees Ditherer does express all that shit, does succeed in putting all sorts of different musical ideas together on a level playing field; moreover, because it concerns itself first with the impact of its sound and less with the cerebral hijinks of past albums, Ditherer is the first Fog record to use those disparate ideas as integrated components working together within strong songs whose simplified frameworks bind it all, make it all just sound like Andrew Broder and two other dudes rocking out the best way they know how.

Broder has stated that with Ditherer he wanted to make something more visceral; this focus, the simplicity of the visceral, both energizes Fog’s music and concentrates it. Fog’s catalogue to date can boast nothing that swings with such heft as the juxtaposition of Broder’s multi-tracked end-rhyme repetitions harmonizing then falling out beneath harsh synthesizer ascensions in “I Have Been Wronged” or the coda of “We Will Have Vanished” announcing itself with indie-rock guitar downstrokes soon joined by a crisp backbeat (recalling — of all things — Justin Timberlake’s “I Think She Knows” interlude). The mixed splashes from the emotional palette are just as affecting; “On the Gallows” has Broder voicing a condemned man ballad that could have been ripped from the pages of Johnny Cash, a soft poem that fades in and out of noise rock crescendos.

In pursuing a goal that might seem wholly stylistic, Broder perhaps inadvertently irons out some of the textual problems with past Fog albums, which too often dipped into atonalities of thought for quirk’s sake. Broder still streams out his latent consciousness: semen runs down a boy’s leg as that boy runs down a flight of stairs, but at least here it feels tied into a sequence of images all contained within one waking dream, the absurdist play “Your Beef Is Mine.” This father-son one-act strolls through a funhouse mirror backdrop, those strange distortions bending the picture into new and unstable reflections, the reality altered and multiplied into various situational vignettes (all odd). The song’s music warps gently along with its disjointed narrative, a post-rock breakdown sidling up easily amidst Dylanesque verses. Wisely, the band uses such moments of instrumental impressionism to convey whatever the words don’t cover. And that uncovered ground is wide open, too, because as Broder tells Newell: “We want to do something that can be thought of in any realm, or no realm. I like music and art that leaves you not knowing how to feel. I am a proponent of ambiguity — not in presentation, that should be 100% — but ambiguity in meaning, the freedom of interpretation.”

What helps give Fog’s ambiguity character and weight, though, is it strong sense of musical reference and lyrics stemming from a definite place. Broder claims that much of Fog’s original concept was to capture “little flashes, images, remembering things from childhood that I had blocked out.” It shouldn’t be too much of a proposition, then, with songs like “Hallelujah Daddy” and “Your Beef Is Mine” in tow, to call Ditherer morbidly cheeky coming-of-age cinema straight from the mind of the adult director, not speaking through the smirking mouthpiece of a former child star or Culkin brother. But let’s further qualify that Ditherer is more a sonic modernization of the unnerving sentiments oozing out of Harold and Maude or Au Revoir Les Enfants than a peer to the likes of Igby Goes Down or, yeesh, Thumbsucker. Meanwhile, “Your Beef Is Mine” is Baumbach’s The Squid and the Whale. And, to step on a slight tangent and fulfill my Cronenberg reference quota, check “The Last I Knew of You” for some esoteric techno-horror; Broder talks about cells being split into two and biological feedback loops until you realize that when he sings the song’s title, “You” is referring to his original self and “I” is a copy of a copy. He concludes by repeating: “My TV has the plague.” Yes, Andrew, I love Videodrome, too.

So, it’s electrifying these inter-crossing wires of influence, the humming of potentialities collected and connected, the dithering of Fog into a more alive and analog self; but, no, I’m not sure how Videodrome fits in with Harold and Maude, or why this album ends with a Low collaboration instead of stopping after “On the Gallows.” The comparison to A New White continues, for Ditherer is a striking, genre-blending, avant-pop aesthetic statement that nonetheless lacks the sophisticated structure, effective pacing, and underhanded thematic clarity of an album like, say, For Hero: For Fool (2006). But maybe that’s next. Fog’s purposeful warts have grown to toes, a digit for each new troupe member; let the high-wire act begin in earnest.