1. The Suburbs are for Lovebirds
2. North
3. Elkore
4. A Thing to Live with that will Live with You
5. Here, You Are Hated
6. Here You Are, Hated
7. Parade Rehearsal 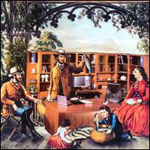 Fond of Tigers: Release the Saviours

A Thing to Live With

Natural wonders aren’t perfect. Walk along the trails of hiatal canyons and see shrubs and bushes slur the clean lines of the cliff. Space is incredibly important to the sound produced by Fond of Tigers—the cracks and creaks between instruments, the in front and behind where harmonies and counter—whatevers tumble into the deluge, strange volumes for familiar tropes, and scrapes and scribbles that seem to sever these songs in half. But unlike the prog giants whom they sometimes echo, Fond of Tigers is able to bleed sounds into one another, creating new tones and ambience so that the technicality of what they’re doing isn’t the only interesting thing here. Plus, seven capable musicians (all based in Vancouver) allow Fond of Tigers a pretty impressive palette, drawing equally on the acoustic and electric, and always willing to shift things up to keep the music expansive and moving.

In pursuing these prog-pop delicacies (well, some are attempts at ambient, but on A Thing to Live With, at least, Fond of Tigers is best when keeping their Fripp-flag flying) the band is taking a more traditional perspective on this stuff than most. “North” blurbles Shanto Battacharya’s bass and Stephen Lyons’ guitar into a glomming noise until Skye Brooks and Dan Gaucher perform their duel-drum dissection on the time signature. The two drummers allows one to hit those clean prog rhythms while the other floats off into jazz territory, sneaking thunderous rolls into the panned channels. Jesse Zubot and Morgan McDonald join in on violin and keyboard harmonies, until the whole thing realigns itself. Eventually, the piece dissolves into some interesting out interplay, where I think even JP Carter’s trumpet joins in, highly filtered.

“Elkore” allows Lyons to play with some Hum riffs while Gaucher and Brooks go nuts. When Carter enters, the two drummers set off on this duel gallop thing which is both dizzying and comical. “A Thing to Live with that will Live with You” takes cues from it’s cyclic title and roundabouts its main (and very pretty) melody on several different instruments, creating new moments as, say, the piano descends and the violin ascends in the mix. Zubot does this thing (the band is quite, er, fond of “things”) at one point that makes the violin sound like whistling, and one of the drummers begins these thick rolls while the other hits toms—it’s particularly affecting. Lyons lets his string notches ring, Carter plays quiet trumpet harmonies in the back, and Battacharya cuts in and out at tasteful moments, sometimes all over the map, sometimes toe-and-heeling it straight down the highway line.

But the real wonders here are the pairing of “Here, You Are Hated” and “Here You Are, Hated.” The titles would be silly if I didn’t think they actually captured the sentiments of the comma usage in each phrasing, and while each is predicated on a fairly simple melody, both are epic in execution. “Here, You Are Hated” has the violin and trumpet performing a slow and deliberate melody, but the other instruments build, surging around its repetition. The drummers especially let loose on the track, and coming from both sides of the audio spectrum, the place where they meet in the middle is pretty chaotic. McDonald’s piano is a giddy group of school children climbing these monkey bars, and Lyons simply adds color in the background, growing more staccato as the track progresses. He gets his turn on “Here You Are, Hated” as the anchor for the track; while he and Zubot play the main riff, McDonald and Carter add accents, and Brooks and Gaucher again flip the “nuts” switch. McDonald starts a particularly interesting harmony about one minute in, which leads to him and Carter slowly building until the song sounds entirely different. All musicians reverse themselves (and this is probably the biggest Crimson moment of the album) as the track knowingly derails but never strays off the beat. There’s a lot of collapsing going on here, as straying musicians re-enter at full strength, ultimately switching back and forth between the original melody and its counter at the drop of a hat. Pretty slick, especially when they clean out the deluge and reduce the thing to its spare parts as it closes.

The album closes with “Parade Rehearsal,” which makes a bold attempt at knocking free jazz into the mix. I’m not sure why it doesn’t quite work for me; there’s certainly nothing lacking in the talent of the players here, and the drummers again show a versatility (and, important for duel drummers, comfort playing with one another) that is impressive. The opening bits, however, don’t seem to have a real direction; that shouldn’t stop you from listening through, though, because the last few minutes of the track yield one of the prettiest moments on the album. Carter maintains his jazzy leads as the rest of the band, led by McDonald’s key-chimes, lock into a beautiful, laid-back groove. The biggest strength here is that the band resists the urge to launch into it again, instead letting the piece work itself out as is: sun-warmed, shimmering, and lovely.

I hope the size of the band (for all of whom this is a side-project, I believe) doesn’t get in the way of them recording together. For a debut release from such a complex project, this thing is already pretty impressive. I want to hear way more.