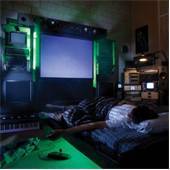 It’s easy to talk about how certain strains of music seem to come from other worlds; it’s considerably harder to make something, like Ford & Lopatin’s Channel Pressure, that actually qualifies. Recorded in Jan Hammer’s studio, likely on some of the equipment responsible for both Mahavishnu Orchestra work and the theme from Miami Vice, the artists formerly known as Games—Joel Ford (of Tigercity) and Daniel Lopatin (of Oneohtrix Point Never, the Youtube account “sunsetcorp,” White Car, and Chuck Person)—present a retro-leaning pop album so clean, so ornate, and so meticulously produced and arranged that it’s a surprise no matter how familiar one is with the involved parties’ back catalogues. It simultaneously skirts lines between parody, homage, and cacophony; the duo engages with eighties synthpop tropes, contemporary computer music, science fiction signifiers, and hardware nerd injokes, and synthesises them (pun intended) into a finished product nowhere near as academic as it sounds.

While Games’ That We Can Play EP (2010) sounded relatively disparate, flirting with several different takes on pop and tacking on a handful of remixes, the duo’s album is strikingly cohesive. It’s got a concept, even, with the songs forming a largely incomprehensible narrative concerning a teenager who resists evil technological overlords, though much like Fucked Up’s David Comes to Life, understanding that component of the record has virtually nothing to do with one’s enjoyment of these songs. Intro track “Scumsoft” immediately sets the tone for everything to follow by smashing a ton of sounds together in under forty seconds, including Lopatin’s signature blurred synthesizer tones, screwed vocal hooks, field recordings, and melodic fragments from somewhere potentially recognizable but too brief to be identifiable. The songs that follow sound as much like sample collages as original compositions, with pop vocals hidden within the mix rather than at its forefront, as on the album’s title track, or with the voice at the center while new sounds move around it in an increasingly chaotic manner, as happens on “Emergency Room.” The latter is defined less by its singer and its structure than by its constantly rising and falling arpeggiators and the squealing noise that comes near its midpoint.

From there, the duo weaves many of their reference points through some of the tightest compositions they’ve ever released, avoiding the pitfalls of chillwave and witch house along the way. “Too Much MIDI (Please Forgive Me)” could have been functional dance-pop in someone else’s hands, but the song manages instead to both indulge a guitar solo and break down totally, with its drum machines cutting in and out at will, and “New Planet” is a transitional piece defined by the sonic signatures of cut-and-pasted loops with the scars from the stitching left intact. “Break Inside” even recalls The-Dream’s deep cuts. However, unlike Lopatin’s prior work, the human voice doesn’t just sound good, it sounds vital to this music’s success. Ford, Jeff Gitelman (of recent Stones Throw signing the Stepkids), and Autre Ne Veut (who suddenly and inexplicably takes a turn on “I Surrender,” which pushes more toward Junior Boys’ icy electro than any of his typical reference points) all deliver performances here that serve as crucial anchors. Though nothing here could chart now or in the actual 1980s, the material has a genuine pop sensibility to it, and it’s a good look for all parties involved.

More than anything else, Channel Pressure is a triumph of studio craft and evidence that the group has as much potential as producers as they do as composers. Its dense, analog, hardware-oriented and layered sound (likely at least partially achieved by Prefuse 73, who helped mix these songs) is something novel in the world of Brooklyn digipsych, and knowing that they plan to handle production for a variety of artists in a studio environment is quite exciting. I very much look forward to hearing not just their new music, but whatever other projects they choose to take on.